I realized that I'd never posted pictures of Virginia in her beloved Gryffindor scarf (which my mother made for "her granddog"), so here she is: 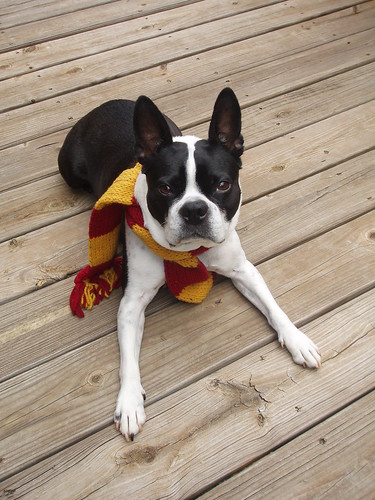 * We went to see The X-Files: I Want to Believe yesterday. It is not a flawless film by any means, but on the whole I was quite satisfied with how it treated the series' characters and themes. I enjoyed it far better than the first X-Files film, and I definitely recommend it, especially to fans of The X-Files.

* I've discovered a terrific new podcast that focuses on science fiction short stories from “SF’s Golden and Silver Ages.” Each show covers a story that was originally published between 1927 and 1965, and includes a dramatic reading (abridged or unabridged, depending on its length) and discussion and commentary about the tale. Thumbs up for A Bite of Stars, A Slug of Time, and Thou.


Father Joe: So you believe in these kind of things?
Fox Mulder: Let's just say that I want to believe.
- The X-Files: I Want to Believe
Collapse