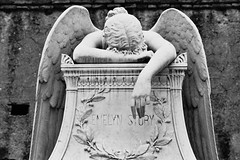 witchcat07, and best wishes for a fantastic year to come!


LINKS OF THE DAY: I have two links for you today.

* The Goth-O-Matic Poetry Generator can assist you in creating darkly gothic poems about horror, persecution, and even vampires!

* Make your own paper Edgar Allan Poe toy. He's cute and emo at the same time! (Thanks to

Excerpt from "Aylmer Vance and the Vampire" by Alice and Claude Askew:
It was not long before this woman came to be regarded in the neighbourhood as a witch. Queer stories were circulated abroad as to her doings, and the reputation of Blackwick Castle became worse than ever before.

And then one day she disappeared. Robert MacThane had been absent upon some business for twenty-four hours, and it was upon his return that he found her gone. The neighbourhood was searched, but without avail, and then Robert, who was a violent man and who had adored his foreign wife, called together certain of his tenants whom he suspected, rightly or wrongly, of foul play, and had them murdered in cold blood. Murder was easy in those days, yet such an outcry was raised that Robert had to take to flight, leaving his two children in the care of their nurse, and for a long while Blackwick Castle was without a master.

But its evil reputation persisted. It was said that Zaida, the witch, though dead, still made her presence felt. Many children of the tenantry and young people of the neighbourhood sickened and died--possibly of quite natural causes; but this did not prevent a mantle of terror settling upon the countryside, for it was said that Zaida had been seen--a pale woman clad in white--flitting about the cottages at night, and where she passed sickness and death were sure to supervene.