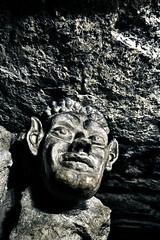 paris catacombs
Uploaded by NursePayne
LINKS OF THE DAY: Here are some Halloween-related lists for you.


LITERATURE OF THE DAY: Today's reading is the haunting "The Double Shadow" by Clark Ashton Smith (1893-1961).

Excerpt from "The Double Shadow" by Clark Ashton Smith:
Then, on a clear summer afternoon, we walked, as was often our custom, on the marble terrace behind the house. In robes of ocean-purple, we paced among the windy trees with their blown, crooked shadows; and there, following us as we went to and fro, I saw the blue shadow of Avyctes and my own shadow on the marble; and between them, an adumbration that was not wrought by any of the cedars. And I was greatly startled, but spoke not of the matter to Avyctes, and observed the unknown shadow with covert care.

I saw that it followed closely the shadow of Avyctes, keeping ever the same distance. And it fluttered not in the wind, but moved with a flowing as of some heavy, thick, putrescent liquid; and its color was not blue nor purple nor black, nor any other hue to which man's eyes are habituated, but a hue as of some unearthly purulence; and its form was altogether monstrous, having a squat head and a long, undulant body, without similitude to beast or devil.

And last, here's a Halloween moment from Lio.