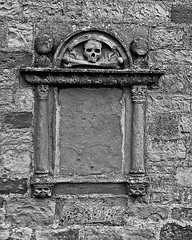 Skull and Bone
Uploaded by musicmuse_ca
LINKS OF THE DAY: I have two Halloween goodies for you today:

* Maria Lectrix began yesterday posting an unabridged dramatic reading of "The Creature from the Cleveland Depths" by an author whose work I love, Fritz Leiber. Here's how Maria Lectrix describes the tale: "'The Creature from Cleveland Depths' by Fritz Leiber used to be a cute little story with twists and turns, with maybe a little horror to it. These days, however, I find that it really horrifies and worries me. A lot." Listen here!

* Derelict London: Cemeteries and Churchyards is a remarkable site with amazing photos. Check it out!


We're getting close, ladies and gentlemen!

For your viewing pleasure, here's one of my favorite Halloween-related moments of film history, the "Night on Bald Mountain" sequence from Fantasia:


LITERATURE OF THE DAY: Today's reading is an early and chilling one, "The Spectre Bride" by William Harrison Ainsworth (1805-1882).

Excerpt from "The Spectre Bride" by William Harrison Ainsworth :
The clock from the northern angle of the castle tolled out the hour of twelve, and the sound echoed dismally in the solemn stillness of the night. Sudden the oaken door at the farther end of the room was gently lifted on its latch, and a bloodless figure, apparelled in the habiliments of the grave, advanced slowly up the apartment. No sound heralded its approach, as it moved with noiseless steps to the table where the lady was stationed. She did not at first perceive it, till she felt a death-cold hand fast grasped in her own, and heard a solemn voice whisper in her ear, 'Clotilda.' She looked up, a dark figure was standing beside her; she endeavoured to scream, but her voice was unequal to the exertion; her eye was fixed, as if by magic, on the form which, slowly removed the garb that concealed its countenance, and disclosed the livid eyes and skeleton shape of her father. It seemed to gaze on her with pity, an regret, and mournfully exclaimed - 'Clotilda, the dresses and the servants are ready, the church bell has tolled, and the priest is at the altar, but where is the affianced bride? There is room for her in the grave, and tomorrow shall she be with me.' –