LINKS OF THE DAY: * LiveScience.com offers a list of Halloween's Top 10 Scary Creatures. Many of them once instilled real fear in the towns and countryside. Here LiveScience.com provides some real science and history of the scary stars of October 31.

* The Literature of the Fantastic Archive is a terrific place to do some Halloween reading. Check out the terrific stories here!

LITERATURE OF THE DAY: For today's reading, we must visit Providence, Rhode Island.
Originally built in 1763, this house on 135 Benefit Street in Providence was deserted and in poor repair during the lifetime of H.P. Lovecraft (1890-1937). The house inspired him to write two works, the poem "The House" and the story "The Shunned House." 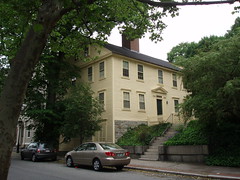 "The House" by H.P. Lovecraft

'Tis a grove-circled dwelling
Set close to a hill,
Where the branches are telling
Strange legends of ill;
Over timbers so old
That they breathe of the dead,
Crawl the vines, green and cold,
By strange nourishment fed;
And no man knows the juices they suck from the depths of their dank slimy bed. 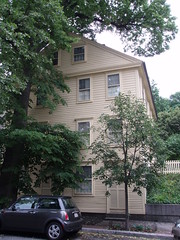 "The Shunned House" by H.P. Lovecraft

Excerpt from "The Shunned House" by H.P. Lovecraft:

From even the greatest of horrors irony is seldom absent. Some times it enters directly into the composition of the events, while sometimes it relates only to their fortuitous position among persons and places. The latter sort is splendidly exemplified by a case in the ancient city of Providence, where in the late forties Edgar Allan Poe used to sojourn often during his unsuccessful wooing of the gifted poetess, Mrs. Whitman. Poe generally stopped at the Mansion House in Benefit Street - the renamed Golden Ball Inn whose roof has sheltered Washington, Jefferson, and Lafayette - and his favourite walk led northward along the same street to Mrs. Whitman's home and the neighbouring hillside churchyard of St. John's whose hidden expanse of eighteenth-century gravestones had for him a peculiar fascination.

Now the irony is this. In this walk, so many times repeated, the world's greatest master of the terrible and the bizarre was obliged to pass a particular house on the eastern side of the street; a dingy, antiquated structure perched on the abruptly rising side hill, with a great unkept yard dating from a time when the region was partly open country. It does not appear that he ever wrote or spoke of it, nor is there any evidence that he even noticed it. And yet that house, to the two persons in possession of certain information, equals or outranks in horror the wildest phantasy of the genius who so often passed it unknowingly, and stands starkly leering as a symbol of all that is unutterably hideous....

* For additional information about the local history and lore that inspired "The Shunned House" (including an episode of alleged nineteenth-century vampirism), go here.

* For additional pictures of the house, visit my virtual walking tour of Lovecraftian Providence.
Collapse