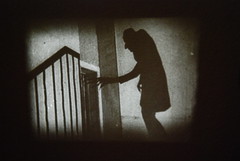 Thanks to everyone who took part in my Mad Scientist Poll. The poll is still open, if you wish to participate; I'll post about the results tomorrow.


The Innsmouth Free Press (a fictional newspaper publishing faux news pieces – lovingly called Monster Bytes – in a Lovecraftian/Cthulhu Mythos universe, as well as original short fiction stories and some of H.P. Lovecraft’s classic tales) has released its latest issue, and it's spooktacular! It focuses on "terrible women" and their activities in H.P. Lovecraft's world. It features seven stories and flash fictions, including "Scream Saver" by the talented

ankh_hpl. Read it for free here, and be sure to check out past issues, as well.

Spooky Text of the Day: For your Saturday, here's a slightly longer story to chill your spine, "The House of the Vampire" by George Sylvester Viereck (1884-1962).

Except:
The smile of Reginald Clarke was the smile of a conqueror. A suspicion of silver in his crown of dark hair only added dignity to his bearing, while the infinitely ramified lines above the heavy-set mouth spoke at once of subtlety and of strength. Without stretch of the imagination one might have likened him to a Roman cardinal of the days of the Borgias, who had miraculously stepped forth from the time-stained canvas and slipped into twentieth century evening-clothes.

With the affability of complete self-possession he nodded in response to greetings from all sides, inclining his head with special politeness to a young woman whose sea-blue eyes were riveted upon his features with a look of mingled hate and admiration.

The woman, disregarding his silent salutation, continued to stare at him wild-eyed, as a damned soul in purgatory might look at Satan passing in regal splendour through the seventy times sevenfold circles of hell.