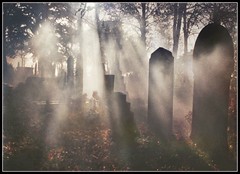 I created the following virtual campus ghost tour for my countdown last year. Many of my readers are new, and I hope you will find this to be fun; for those of you who read my post last year, I hope you will enjoy revisiting the spooky haunts of Lenoir-Rhyne University.

Special Feature of the Day: Each year for Halloween at my husband's school, Lenoir-Rhyne University, there is "campus ghost tour" during which the guides share local folklore, campus legends, and creepy stories. Thanks to the generosity of the good people at Lenoir-Rhyne, I now have all of those spooky tales to share with you. I have taken pictures around the campus to illustrate the stories, so that I may lead you through the tour virtually. 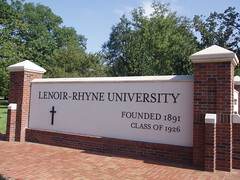 
Today's Spooky Text of the Day: Today's wonderfully eerie story is "The Singular Death of Morton" by Algernon Blackwood (1869-1951).

Excerpt:
Then, suddenly, as they had turned to go, after much vain shouting and knocking at the door, a face appeared for an instant at a window, the shutter of which was half open. His friend saw it first, and called aloud. The face nodded in reply, and presently a young girl came round the corner of the house, apparently by a back door, and stood staring at them both from a little distance.

And from that very instant, so far as he could remember, these queer feelings had entered his heart-fear, distrust, misgiving. The thought of it now, as he lay in bed in the darkness, made his hair rise. There was something about that girl that struck cold into the soul. Yet she was a mere slip of a thing, very pretty, seductive even, with a certain serpent-like fascination about her eyes and movements; and although she only replied to their questions as to refreshment with a smile, uttering no single word, she managed to convey the impression that she was a managing little person who might make herself very disagreeable if she chose. In spite of her undeniable charm there was about her an atmosphere of something sinister. He himself did most of the questioning, but it was his older friend who had the benefit of her smile. Her eyes hardly ever left his face, and once she had slipped quite close to him and touched his arm.

The strange part of it now seemed to him that he could not remember in the least how she was dressed, or what was the colouring of her eyes and hair. It was almost as though he had felt, rather than seen, her presence.