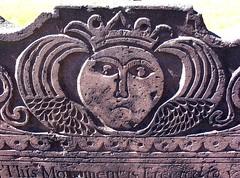 lizziebelle for the fantastic picture today. (Click it for a larger version.) For the next several days, I'll be posting some of her hauntingly beautiful photographs from various cemeteries.

* Thanks also to everyone who took part in my Creepy Fictional Children poll. The poll is still open, if you'd like to participate!

* Here's a Halloween-appropriate article from io9: "10 Reasons Not to Bring Someone Back from the Dead."

* Celebrating its 11th year on the air, "Out ov the Coffin" is a specialty radio program hosted by D.J. Ichabod. What was born as a means of spreading dark and esoteric music to the Nashville area is now available to the whole world over the web, both as a live stream and an archived show. This radio program is great fun, and it's brought to you by WRVU, broadcasting from my alma mater, Vanderbilt University. Go 'Dores! (Note: Go here to download the 2007 Halloween special, which includes "guest cameos" from Boris Karloff, Vincent Price, and Bela Lugosi, among others!)

Excerpt:
"Once upon a time," began Uncle Larry—"in fact, a very few years ago—there lived in the thriving town of New York a young American called Duncan—Eliphalet Duncan. Like his name, he was half Yankee and half Scotch, and naturally he was a lawyer, and had come to New York to make his way. His father was a Scotchman, who had come over and settled in Boston, and married a Salem girl. When Eliphalet Duncan was about twenty he lost both of his parents. His father left him with enough money to give him a start, and a strong feeling of pride in his Scotch birth; you see there was a title in the family in Scotland, and although Eliphalet's father was the younger son of a younger son, yet he always remembered, and always bade his only son to remember, that his ancestry was noble. His mother left him her full share of Yankee grit, and a little house in Salem which has belonged to her family for more than two hundred years. She was a Hitchcock, and the Hitchcocks had been settled in Salem since the year 1. It was a great-great-grandfather of Mr. Eliphalet Hitchcock who was foremost in the time of the Salem witchcraft craze. And this little old house which she left to my friend Eliphalet Duncan was haunted.

"By the ghost of one of the witches, of course," interrupted Dear Jones.

"Now how could it be the ghost of a witch, since the witches were all burned at the stake? You never heard of anybody who was burned having a ghost, did you?"

"That's an argument in favor of cremation, at any rate," replied Jones, evading the direct question.