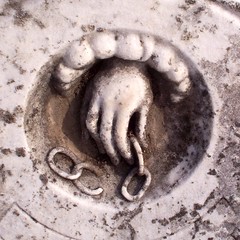 * Thanks to everyone who took part in my Creepy Fictional Children poll. The poll is still open, if you'd like to participate! I'll report on the results tomorrow.

* From Topless Robot: "The 10 Craziest Old People in Horror Movies."

* Talk about some great Halloween audio fun! From SFFAudio: Bill Hollweg, the host of BrokenSea Audio’s "OTR Swag Cast" is a connoisseur of old-time radio. And "OTR Swag Cast" is his podcast devoted to it. The idea behind the “Swag Cast” is to “digitally restore shows from the golden age of radio.” And so, with each episode, he picks, cleans up, and podcasts some old time radio shows (along with assorted interviews). The most recent programs feature some rather rare Alfred Hitchcock and Vincent Price interviews and dramatizations. Give it a listen! You’ll find a “Jack the Ripper” style drama, with an ending that should never be replicated, a drama about Vincent Price starring Vincent Price, and interviews in which you’ll learn about both men and their love of audio! Go to BrokenSea Audio's OTR Swag Cast.

Excerpt:
My awaking was equally instantaneous, and I sat bolt upright in bed under the impression that some bright light had been flashed in my face, though it was now absolutely pitch dark. I knew exactly where I was, in the room which I had dreaded in dreams, but no horror that I ever felt when asleep approached the fear that now invaded and froze my brain. Immediately after a peal of thunder crackled just above the house, but the probability that it was only a flash of lightning which awoke me gave no reassurance to my galloping heart. Something I knew was in the room with me, and instinctively I put out my right hand, which was nearest the wall, to keep it away. And my hand touched the edge of a picture-frame hanging close to me.

I sprang out of bed, upsetting the small table that stood by it, and I heard my watch, candle, and matches clatter onto the floor. But for the moment there was no need of light, for a blinding flash leaped out of the clouds, and showed me that by my bed again hung the picture of Mrs. Stone. And instantly the room went into blackness again. But in that flash I saw another thing also, namely a figure that leaned over the end of my bed, watching me. It was dressed in some close-clinging white garment, spotted and stained with mold, and the face was that of the portrait.

Overhead the thunder cracked and roared, and when it ceased and the deathly stillness succeeded, I heard the rustle of movement coming nearer me, and, more horrible yet, perceived an odor of corruption and decay. And then a hand was laid on the side of my neck, and close beside my ear I heard quick-taken, eager breathing. Yet I knew that this thing, though it could be perceived by touch, by smell, by eye and by ear, was still not of this earth, but something that had passed out of the body and had power to make itself manifest.