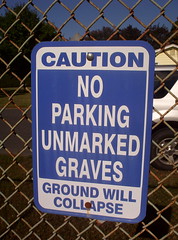 lizziebelle for allowing me to feature her wonderfully eerie pictures in my posts these past several days (including this one today). Be sure to check out all of her remarkable cemetery photos here.

* One of my favorite groups to listen to during the Halloween season is Nox Arcana. Whether you want music inspired by the Grimm Brothers, Edgar Allan Poe, and H.P. Lovecraft, or music inspired by pirates, vampires, and haunted houses, their albums are a perfect backdrop to October. They've released a new album for the season called Blackthorn Manor, based on the theme of a "forsaken sanitarium that is haunted by the souls of the dead and plagued by the dark essence of evil."

You can listen to many of their songs streaming at their website.

Spooky Text of the Day: One of the many reasons I love Halloween is the sense of awe and wonder it produces, if we allow ourselves to be receptive to it. Neil Gaiman's poem captures this very well, and I like to revisit it each October. It seems particularly ideal for a Monday, and thus today's text is "The Day The Saucers Came" by Neil Gaiman (1960-present).

That day, the saucers landed. Hundreds of them, golden,
Silent, coming down from the sky like great snowflakes,
And the people of Earth stood and stared as they descended,
Waiting, dry-mouthed to find what waited inside for us
And none of us knowing if we would be here tomorrow
But you didn't notice it because

That day, the day the saucers came, by some coincidence,
Was the day that the graves gave up their dead
And the zombies pushed up through soft earth
or erupted, shambling and dull-eyed, unstoppable,
Came towards us, the living, and we screamed and ran,
But you did not notice this because

On the saucer day, which was the zombie day, it was
Ragnarok also, and the television screens showed us
A ship built of dead-man's nails, a serpent, a wolf,
All bigger than the mind could hold, and the cameraman could
Not get far enough away, and then the Gods came out
But you did not see them coming because

You can watch Neil Gaiman read this poem here: