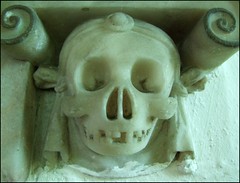 Thanks to everyone who took part in my poll about the greatest stars of contemporary horror cinema. The poll is still open, if you would like to weigh in with your vote!

* Here's some "must listening" for the Halloween season: the Science Fiction Poetry Association's popular On-Line Halloween Poetry Reading. Included on the site are audio files of creepy poems (reprints and written especially for this project) and lots of atmospheric photography to accompany the readings. More audio files are being added all the time. In particular, check out

* From SciFiWire: "9 Rampaging Space Zombies Hungry for Our Sci-Fi Brains."

* Need to buy a special someone a Halloween gift? Try the Alien Abuduction Lamp.

Excerpt:
Suddenly Fisher disappeared; and one of his neighbours - a man named Smith - gave out that he had gone to England, but would return in two or three years. Smith produced a document, purporting to be executed by Fisher; and, according to this document, Fisher had appointed Smith to act as his agent during his absence. Fisher was a man of very singular habits and eccentric character and his silence about his departure, instead of creating surprise, was declared to be "exactly like him."

About six months after Fisher's disappearance, an old man called Ben Weir, who had a small farm near Penrith and who always drove his own cart to market, was returning from Sydney one night when he beheld, seated on a rail which bounded the road - Fisher. The night was very dark and the distance of the fence from the middle of the road was, at least, twelve yards. Weir, nevertheless, saw Fisher's figure seated on the rail. He pulled his old mare up, and called out, "Fisher, is that you?" No answer was returned; but there, still on the rail, sat the form of the man with whom he had been on the most intimate terms. Weir - who was not drunk, though he had taken several glasses of strong liquor on the road - jumped off his cart and approached the rail. To his surprise, the form vanished.