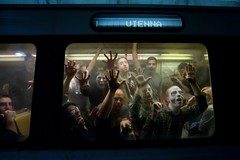 
* Of course, this leads me to a question: what is your favorite zombie film?

Open to: All, detailed results viewable to: All. Participants: 15


* For a multimedia exploration of the zombie menace, check out The Zombie Influx Project.


* In honor of National Zombie Day, I offer you two YouTube classics that are always worth revisiting. First, here's Jonathan Coulton's "Re: Your Brains:

And, of course, some Zombie Haiku:


Spooky Text of the Day: For some zombie-appropriate reading, we need look no further than the man himself, H.P. Lovecraft, and his 1925 story "In the Vault."

Excerpt:
There is nothing more absurd, as I view it, than that conventional association of the homely and the wholesome which seems to pervade the psychology of the multitude. Mention a bucolic Yankee setting, a bungling and thick-fibred village undertaker, and a careless mishap in a tomb, and no average reader can be brought to expect more than a hearty albeit grotesque phase of comedy. God knows, though, that the prosy tale which George Birch’s death permits me to tell has in it aspects beside which some of our darkest tragedies are light.