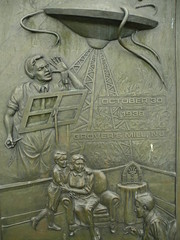 On this night 71 years ago, Orson Welles and the Mercury Theatre on the Air shook the world with their 60-minute Halloween-themed radio adaptation of H.G. Wells' classic novel The War of the Worlds. At the time, the documetary-style broadcast captured the imagination of listeners and created mass panic and alarm. To this day, the broadcast remains an unparalleled masterpiece of science fiction horror.

I've repeatedly listened to (and, in my classes, taught) this program over the years, and it remains a great favorite of mine. I find it also takes on new meaning in different contexts, as our experiences and world events change. Truly chilling listening. "In the 39th year of the twentieth century came the Great Disillusionment..."

* Read "The War of the Worlds Radio Broadcast: The Historical Perspective."

* See the website for the 1938 Martian Landing Monument at Grovers Mill, New Jersey.

Spooky Text of the Day: Today's text is the original script from the The Mercury Theatre on the Air, The War of the Worlds, October 30, 1938.

Excerpt:
ANNOUNCER: I'm speaking from the roof of the Broadcasting Building, New York City. The bells you hear are ringing to warn the people to evacuate the city as the Martians approach. Estimated in last two hours three million people have moved out along the roads to the north, Hutchison River Parkway still kept open for motor traffic. Avoid bridges to Long Island . . . hopelessly jammed. All communication with Jersey shore closed ten minutes ago. No more defenses. Our army wiped out . . . artillery, air force, everything wiped out. This may be the last broadcast. We'll stay here to the end . . . People are holding service below us . . . in the cathedral.
(VOICES SINGING HYMN)

Now I look down the harbor. All manner of boats, overloaded with fleeing population, pulling out from docks.
(SOUND OF BOAT WHISTLES)

Streets are all jammed. Noise in crowds like New Year's Eve in city. Wait a minute . . . Enemy now in sight above the Palisades. Five -- five great machines. First one is crossing river. I can see it from here, wading the Hudson like a man wading through a brook . . . A bulletin's handed me . . . Martian cylinders are falling all over the country. One outside Buffalo, one in Chicago, St. Louis . . . seem to be timed and spaced . . . Now the first machine reaches the shore. He stands watching, looking over the city. His steel, cowlish head is even with the skyscrapers. He waits for the others. They rise like a line of new towers on the city's west side . . . Now they're lifting their metal hands. This is the end now. Smoke comes out . . . black smoke, drifting over the city. People in the streets see it now. They're running towards the East River . . . thousands of them, dropping in like rats. Now the smoke's spreading faster. It's reached Times Square. People trying to run away from it, but it's no use. They're falling like flies. Now the smoke's crossing Sixth Avenue . . . Fifth Avenue . . . one hundred yards away . . . it's fifty feet . . .
(BODY FALLS)