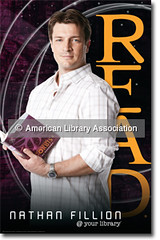 gods_lil_rocker and happy early birthday to

bouncybabylemur. May you both have a terrific day and a wonderful year to come!


* Now available: Three Hundred Years Hence, a newly illustrated online edition of the 1836 work by Mary Griffith (1772-1846), the earliest known utopian novel by a woman from the United States.

* Heads up, Browncoats: Nathan Fillion will be featured on an upcoming ALA Celebrity READ poster. (See right.) I love it!

* Great news for vampire lovers! Now free, unabridged narrations of all three volumes of Thomas Preskett Prest's classic Varney the Vampire are available for download from Librivox. Originally published as a penny dreadful from 1845 until 1847, when it first appeared in book form, Varney the Vampyre is a forerunner to vampire stories such as Dracula, which it heavily influenced.

* Now here's an idea: "ZombieFit Classes: Can They Help You Survive the Coming Zombie Apocalypse?"

* Why yes, I want one: "15 Geeky Home Theater Themes to Ravish Your Senses." (Thanks to

* Last but not least, The H.P. Lovecraft Society is in the final stages of completing its next motion picture, The Whisperer in Darkness:


"When our own minds were sufficiently enlightened, when our hearts were sufficiently inspired by the humane principles of the Christian religion, we emancipated the blacks. What demon closed up the springs of tender mercy when Indian rights were in question I know not? – but I must not speak of it!"
-- from Three Hundred Years Hence by Mary Griffith, 1836 (Note that this was published two years before the Cherokee Trail of Tears.)
Collapse