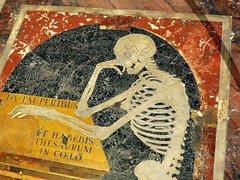 Today, my friends, is 10-10-10, also known as 42 Day. Binary 42 is the most significant date in this century because, as all good readers of Douglas Adams (1952-2001) know, forty-two is the answer to Life, the Universe, and Everything. If you're looking for a good scare, I recommend celebrating with some Vogon poetry.

Today is also the launch of the second volume in the amazing StarShipSofa Stories collection, which I've mentioned previously. With stories by the likes of Neil Gaiman, Ekaterina Sedia, Nancy Kress, and Lawrence Santoro, this fully illustrated volume should make for terrific reading! Here's more information.
( Collapse )


I have more listening suggestions for your Halloween season:

Text of the Day: Today's verses tell a spooky story: "The Skeleton in Armor" by Henry Wadsworth Longfellow (1807-1882).

"Speak! speak I thou fearful guest
Who, with thy hollow breast
Still in rude armor drest,
Comest to daunt me!
Wrapt not in Eastern balms,
Bat with thy fleshless palms
Stretched, as if asking alms,
Why dost thou haunt me?"

Then, from those cavernous eyes
Pale flashes seemed to rise,
As when the Northern skies
Gleam in December;
And, like the water's flow
Under December's snow,
Came a dull voice of woe
From the heart's chamber.