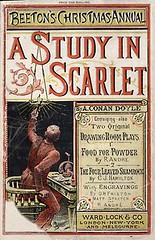 I'll be off tomorrow for StellarCon! I look forward to seeing some of you there. In the meantime, I have many links to share:

* StarShipSofa's episode with the nominees for this year's British Science Fiction Association Award for "Best Short Story" is now available, and it includes my narration of Aliette de Bodard's "The Shipmaker."

* The second of my two interviews with KosmosOnline Podcast, this one on the themes of liberty in Joss Whedon's Firefly and Serenity, is now available here.

* Underworld will be releasing a soundtrack album for Nick Dear's new Frankenstein play.

* March 4, 2011 marks the 130th anniversary of Sherlock Holmes's investigation of the "Lauriston Gardens Mystery," aka A Study in Scarlet.

study130 is a new community celebrating A Study in Scarlet (and its modern incarnations, including Neil Gaiman's "A Study in Emerald" and the BBC's Sherlock episode "A Study in Pink").

* I thought this was a most interesting exchange regarding Helen Mirren's role in the latest version of The Tempest:
-- "On Prospero's Island" by Ursula K. Le Guin
-- in response, "As Weak as Women's Magic" by Athena Andreadis

* From Cthulhu Chick: "Wordcount for Lovecraft’s Favorite Words." "Hideous" FTW! (Thanks to

* When oh when is the second series of Garrow's Law going to be available on US DVD? We inhaled the first series, and now we need more.

clara_posts! May you enjoy your day and a wonderful year to come.


"I consider that a man's brain originally is like a little empty attic, and you have to stock it with such furniture as you choose. A fool takes in all the lumber of every sort that he comes across, so that the knowledge which might be useful to him gets crowded out, or at best is jumbled up with a lot of other things, so that he has a difficulty in laying his hands upon it."
- Sherlock Holmes, A Study in Scarlet, Arthur Conan Doyle
Collapse