You may recall that a couple of years ago I posted pictures of one of the most atmospheric and fascinating places I've found nearby, the abandoned Henry River Mill Village in Burke County. It's only about 15 minutes by interstate from our favorite restaurant (glorious poblano chile rellenos), and since we first stumbled on it during one of our drives, we often go by there, as I'm rather taken by the mournful and gothic feel of these lonely, decaying buildings. 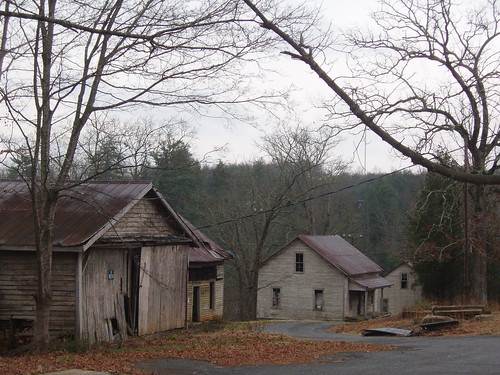 Much to my delight, this village is now being readied as the set for shooting part of the new film adaptation of the fantastic young adult dystopian novel The Hunger Games by Suzanne Collins.

If I had to guess, I'd imagine this will be used as part of District 12, the home of Katniss Everdeen, which represents the Appalachian coal-mining area of Panem in the books. Here's a bit more about the local preparation for the filming. You can see more of my pictures of the town, pre-filming, here, and read more about its past on Treasure.net here.

Other motion pictures have also been filmed in Burke County to take advantage of its impressive geography, including key outdoor sequences from 1992's The Last of the Mohicans.