Thanks to everyone who took part in yesterday's poll about lesser-known Halloween-appropriate films! It's still open, if anyone else would like to participate.


Today's atmospheric photo is from the wonderful 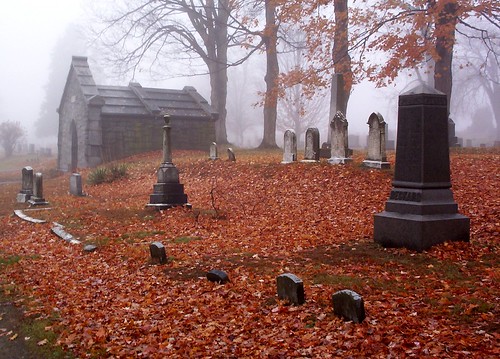 Excerpt:
It was not in the personal appearance of the little, dry, wizened old man that the interest lay, for he was precisely like dozens of other church-guardians in France, but in a curious furtive, or rather hunted and oppressed, air which he had. He was perpetually half glancing behind him; the muscles of his back and shoulders seemed to be hunched in a continual nervous contraction, as if he were expecting every moment to find himself in the clutch of an enemy. The Englishman hardly knew whether to put him down as a man by haunted by a fixed delusion, or as one oppressed by a guilty conscience, or as an unbearably henpecked husband. The probabilities, when reckoned up, certainly pointed to the last idea; but, still, the impression conveyed was that of a more formidable persecutor even than a termagant wife.

However, the Englishman (let us call him Dennistoun) was soon too deep in his notebook and too busy with his camera to give more than an occasional glance to the sacristan. Whenever he did look at him, he found him at no great distance, either huddling himself back against the wall or crouching in one of the gorgeous stalls.