HURRY! Today is the last day to enter the giveaway of books I discuss in my interview at Darkcargo! Go to the second half of my two-part interview with Darkcargo (in which I talk about science fiction, Sherlock Holmes, upcoming publications, and more). Comment there to enter the fantastic book giveaway, with my picks (Mary Shelley! Sherlock Holmes!). Check it out!


I think there's something truly haunting about this photo of a sculpture from the catacombs of Paris: 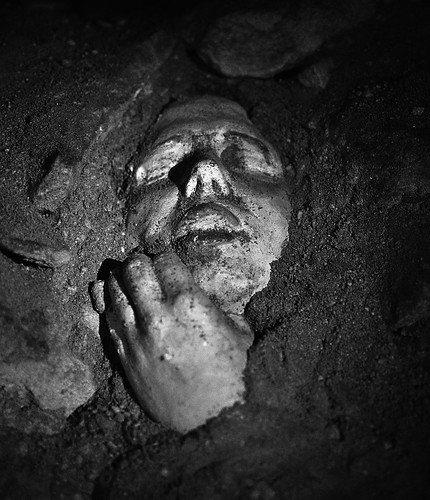 Text of the Day: Do you like H.G. Wells's War of the Worlds and/or In the Days of the Comet? Then you'll enjoy today's short novella, the end-of-the-world science fiction tale by Lloyd Eshbach (1910-2003), The Gray Plague. It was originally published in the November 1930 issue of Astounding Stories of Super-Science.

Excerpt:
Five months before the beginning of that period of madness, that time of chaos and death that became known as the Gray Plague, the first of the strange meteors fell to Earth. It landed a few miles west of El Paso, Texas, on the morning of March 11th.

Maimed and captive, in the depths of an interplanetary meteor-craft, lay the only possible savior of plague-ridden Earth.

In a few hours a great throng of people gathered around the dully smoldering mass of fire-pitted rock, the upper half of which protruded from the Earth where it had buried itself, like a huge, roughly outlined hemisphere. And then, when the crowd had assumed its greatest proportions, the meteor, with a mighty, Earth-shaking roar, exploded.

A vast flood of radiance, more brilliant than the light of the sun, lit up the sky for miles around. One moment, a throng of curious people, a number of scientists, newspaper men—a crashing explosion—and then a great, yawning pit sending forth a blinding radiance! Destruction and death where life had been.

The brilliant light streamed from the pit for about ten minutes; then like a snuffed-out candle flame, it vanished.