Every year, my parents send their granddog, the fabulous Virginia, a Halloween costume for her to wear (as well as treats to bribe her to model for pictures). This year's was Princess Leia from Star Wars -- a bit of a family joke, as it was my Halloween costume when I was six. Poor Virginia, paying for my past! LOL. 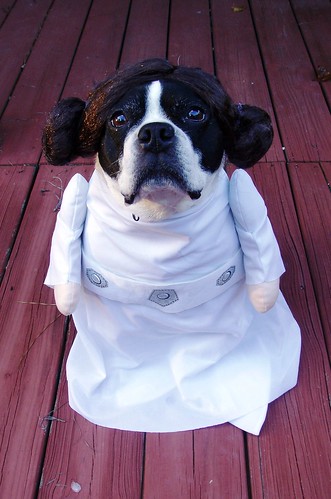 As always, you can see more pictures of Virginia here.

Excerpt:
Conspicuous on the orchard side between two of the flanking trees was a white object, which I took to be a tall stone, a vertical splinter of one of the tilted limestone reefs with which the fields of the region are scarred.

The road itself I saw plain as a boxwood ruler on a green baize table. It gave me a pleasurable anticipation of a chance for a burst of speed. I had been painfully traversing closely forested, semi-mountainous hills. Not a farmhouse had I passed, only wretched cabins by the road, more than twenty miles of which I had found very bad and hindering. Now, when I was not many miles from my expected stopping-place, I looked forward to better going, and to that straight, level bit in particular.

As I sped cautiously down the sharp beginning of the long descent the trees engulfed me again, and I lost sight of the valley. I dipped into a hollow, rose on the crest of the next hill, and again saw the house, nearer, and not so far below.

The tall stone caught my eye with a shock of surprise. Had I not thought it was opposite the house next the orchard? Clearly it was on the left-hand side of the road toward the house. My self-questioning lasted only the moment as I passed the crest. Then the outlook was cut off again; but I found myself gazing ahead, watching for the next chance at the same view.

At the end of the second hill I only saw the bit of road obliquely and could not be sure, but, as at first, the tall stone seemed on the right of the road.