greenhoodloxley! May all of you enjoy many happy returns of the day.


As you may have guessed, I love the writings of H.P. Lovecraft. If you'd like (and only if you'd like!), you can...
* read my essay (originally published in Apex Science Fiction and Horror Digest) "The New Shoggoth Chic: Why H.P. Lovecraft Now?" here;
* read my essay "H.P. Lovecraft and the Imaginative Tale" at Revolution Science Fiction here: Part 1 and Part 2;
* listen to my tribute to Lovecraft on this episode of StarShipSofa; and/or
* listen to my two-part discussion of Lovecraft's non-fiction on StarShipSofa: Part 1 and Part 2.


From that tour, here is the house used by H.P. Lovecraft as the Ward house in his novella The Case of Charles Dexter Ward. (One of the students had never read the tale, and yet he said the house still gave him chills.) In the story, Lovecraft describes the house as follows:

"His home was a great Georgian mansion atop the well-nigh precipitous hill that rises just east of the river; and from the rear windows of its rambling wings he could look dizzily out over all the clustered spires, domes, roofs, and skyscraper summits of the lower town to the purple hills of the countryside beyond. Here he was born, and from the lovely classic porch of the double-bayed brick facade his nurse had first wheeled him in his carriage..." 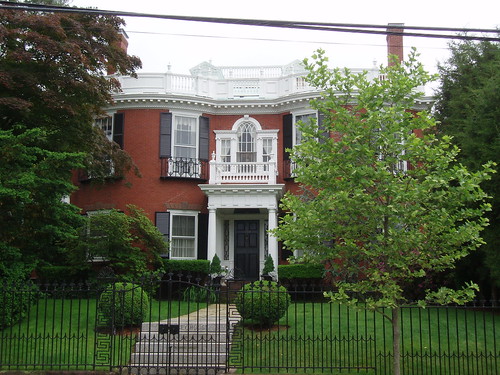 Text of the Day: You guessed it! Today's text is the wonderfully haunting novella The Case of Charles Dexter Ward by H.P. Lovecraft (1890-1937).

Excerpt:
From a private hospital for the insane near Providence, Rhode Island, there recently disappeared an exceedingly singular person. He bore the name of Charles Dexter Ward, and was placed under restraint most reluctantly by the grieving father who had watched his aberration grow from a mere eccentricity to a dark mania involving both a possibility of murderous tendencies and a profound and peculiar change in the apparent contents of his mind. Doctors confess themselves quite baffled by his case, since it presented oddities of a general physiological as well as psychological character.

Download an unabridged reading on episodes 60-75 of the Cthulhu podcast.

Listen to a discussion of The Case of Charles Dexter Ward on episodes 54-58 of The H.P. Lovecraft Literary Podcast.
Collapse