* Thanks to everyone who took part in yesterday's poll. It's still open, if anyone else would like to participate.

* Don't forget about this month's giveaway, which is open through October 30. Everyone who enters will win!

* I have some happy news to share. You may recall that I was part of the filming of the Italian documentary Oltre la Frontiera (Beyond the Frontier) in South Dakota - in fact, the filmmakers, Francesco and Massimo Piccioli, were kind enough to give me third "actor" billing behind the fabulous star, my friend Giuseppe Festa. Well, the film just aired at the prestigious 23rd International Film Festival in Rovereto, along with a number of films from different countries, and it won an award as the best in its category ("Archeology and Society")! The Italian papers have run several stories on the film over the weekend, and I couldn't be happier. Congratulations to Giuseppe, the Piccioli brothers, and everyone involved.

Now, on with the countdown! 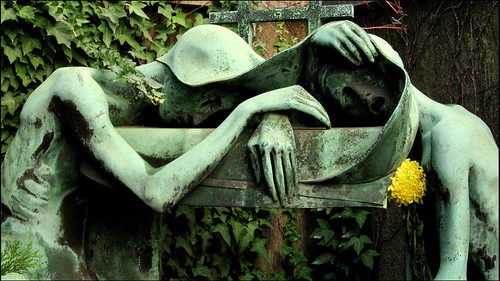 Text of the Day: Today's work is the eerie The Haunted Man and the Ghost's Bargain by Charles Dickens (1812-1870), who turned 200 years old this year.

Excerpt: Everybody said so.

Far be it from me to assert that what everybody says must be true. Everybody is, often, as likely to be wrong as right. In the general experience, everybody has been wrong so often, and it has taken, in most instances, such a weary while to find out how wrong, that the authority is proved to be fallible. Everybody may sometimes be right; “but that’s no rule,” as the ghost of Giles Scroggins says in the ballad.

The dread word, GHOST, recalls me.

Everybody said he looked like a haunted man. The extent of my present claim for everybody is, that they were so far right. He did.

Who could have seen his hollow cheek; his sunken brilliant eye; his black-attired figure, indefinably grim, although well-knit and well-proportioned; his grizzled hair hanging, like tangled sea-weed, about his face, - as if he had been, through his whole life, a lonely mark for the chafing and beating of the great deep of humanity, - but might have said he looked like a haunted man?

Who could have observed his manner, taciturn, thoughtful, gloomy, shadowed by habitual reserve, retiring always and jocund never, with a distraught air of reverting to a bygone place and time, or of listening to some old echoes in his mind, but might have said it was the manner of a haunted man?

Who could have heard his voice, slow-speaking, deep, and grave, with a natural fulness and melody in it which he seemed to set himself against and stop, but might have said it was the voice of a haunted man?

Who that had seen him in his inner chamber, part library and part laboratory, - for he was, as the world knew, far and wide, a learned man in chemistry, and a teacher on whose lips and hands a crowd of aspiring ears and eyes hung daily, - who that had seen him there, upon a winter night, alone, surrounded by his drugs and instruments and books; the shadow of his shaded lamp a monstrous beetle on the wall, motionless among a crowd of spectral shapes raised there by the flickering of the fire upon the quaint objects around him; some of these phantoms (the reflection of glass vessels that held liquids), trembling at heart like things that knew his power to uncombine them, and to give back their component parts to fire and vapour; - who that had seen him then, his work done, and he pondering in his chair before the rusted grate and red flame, moving his thin mouth as if in speech, but silent as the dead, would not have said that the man seemed haunted and the chamber too?