In the past, several of you have recommended Roger Zelazny's novel A Night in the Lonesome October as perfect Halloween reading. You were right! It's fantastic. Here's my review. Now the always-eldritch Lovecraft eZine has released its October 2012 edition, which is a themed issue based on A Night in the Lonesome October - and Zelazny's son is involved! Perfect timing for the holiday season. You can read the issue for free here at the website. 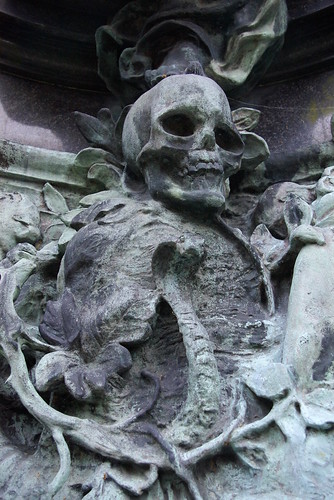 rossart1 for suggesting this author.)

Excerpt: She is very old. Her daughters and sons are all dead, but her granddaughter, who is most respectable, and the cousin of a physician, says that Urda is twenty-four and a hundred, and there are others who say that she is older still. She watches all that the Iceland people do in the new land; she knows about the building of the five villages on the North Dakota plain, and of the founding of the churches and the schools, and the tilling of the wheat farms. She notes with suspicion the actions of the women who bring home webs of cloth from the store, instead of spinning them as their mothers did before them; and she shakes her head at the wives who run to the village grocery store every fortnight, imitating the wasteful American women, who throw butter in the fire faster than it can be turned from the churn.

She watches yet other things. All winter long the white snows reach across the gently rolling plains as far as the eye can behold. In the morning she sees them tinted pink at the east; at noon she notes golden lights flashing across them; when the sky is gray—which is not often—she notes that they grow as ashen as a face with the death shadow on it. Sometimes they glitter with silver-like tips of ocean waves. But at these things she looks only casually. It is when the blue shadows dance on the snow that she leaves her corner behind the iron stove, and stands before the window, resting her two hands on the stout bar of her cane, and gazing out across the waste with eyes which age has restored after four decades of decrepitude.

The young Icelandmen say: "Mother, it is the clouds hurrying across the sky that make the dance of the shadows."

"There are no clouds," she replies, and points to the jewel-like blue of the arching sky.

"It is the drifting air," explains Fridrik Halldersson, he who has been in the Northern seas. "As the wind buffets the air, it looks blue against the white of the snow. 'Tis the air that makes the dancing shadows."

But Urda shakes her head, and points with her dried finger, and those who stand beside her see figures moving, and airy shapes, and contortions of strange things, such as are seen in a beryl stone.

"But Urda Bjarnason," says Ingeborg Christianson, the pert young wife with the blue-eyed twins, "why is it we see these things only when we stand beside you and you help us to the sight?"

"Because," says the mother, with a steel-blue flash of her old eyes, "having eyes ye will not see!" Then the men laugh. They like to hear Ingeborg worsted. For did she not jilt two men from Gardar, and one from Mountain, and another from Winnipeg?

Not even Ingeborg can deny that Mother Urda tells true things.

"To-day," says Urda, standing by the little window and watching the dance of the shadows, "a child breathed thrice on a farm at the West, and then it died."