I'm off to Louisville. Catch you on the flip side! 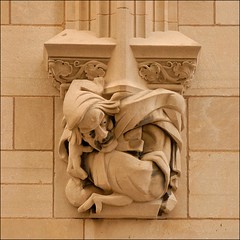 Gargoyle on Tulsa's Philtower Building
Hidden is here, the latest book by the mother-daughter team of P.C. and Kristen Cast in their their best-selling House of Night series, which is set in an alternate-universe version of my hometown, Tulsa, Oklahoma, USA -- a version of Tulsa that has, among other interesting inhabitants, vampyres (that's the Casts' spelling). (I had the delight of writing an essay about the ways in which the authors reimagine the most Gothic sites in Tulsa for the collection Nyx in the House of Night: Folklore, Religion, and Myth in the PC and Kristin Cast Vampyre Series.)

Many of the places described in the novels truly exist (including Street Cats, a non-profit rescue for felines, Utica Square, the Starbucks there, St. Joseph Monastery, and the school attended by protagonist Zoey Redbird -- and yours truly -- South Intermediate High School). 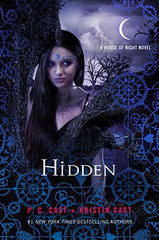 In honor of Hidden's publication, I thought I might revisit my quick tour of some of the most interesting "real life" places in Tulsa that feature in the series, several of which are reputed to be haunted.

Text of the Day: Beyond its Tulsa setting, the House of Night series is also known for its incorporation of pagan, Wiccan, and Catholic traditions, Manichean thought, and especially Cherokee mythology, the latter of which explains the presence of Raven Mockers as characters. It seemed fitting to quote today from the classic Myths of the Cherokees by James Mooney (1861-1921) for more information about the terrifying Raven Mockers.

Excerpt: Of all the Cherokee wizards or witches the most dreaded is the Raven Mocker (Kâ'lanû Ahkyeli'skï), the one that robs the dying man of life. They are of either sex and there is no sure way to know one, though they usually look withered and old, because they have added so many lives to their own.

At night, when some one is sick or dying in the settlement, the Raven Mocker goes to the place to take the life. He flies through the air in fiery shape, with arms outstretched like wings, and sparks trailing behind, and a rushing sound like the noise of a strong wind. Every little while as he flies he makes a cry like the cry of a raven when it "dives" in the air--not like the common raven cry--and those who hear are afraid, because they know that some man's life will soon go out.