Don't forget that my Lovecraftian giveaway is open through tomorrow. Everyone who participates wins! 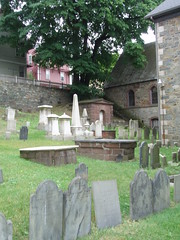 For today's post, I'd like to return to an old favorite. One of the spookiest, most atmospheric places I know is a spot perfect for visiting (virtually, if not physically) during Halloween: the graveyard of St. John's Episcopal Church in Providence, Rhode Island.

To the right, do you see that dusty rose house overlooking the gravestones? From 1816-1863, that was the home of Sarah Helen Whitman, the poet and spiritualist with whom Edgar Allan Poe was enamored. In a 1934 letter, H.P. Lovecraft wrote: "The rear of this house overlooks the hidden churchyard of St. John's, where Poe used to wander on moonlight nights."

Lovecraft also described the cemetery in his story "The Shunned House": "I have reared a marble urn to his memory in St. John's churchyard - the place that Poe loved - the hidden grove of giant willows on the hill, where tombs and headstones huddle quietly between the hoary bulk of the church and the houses and bank walls of Benefit Street." 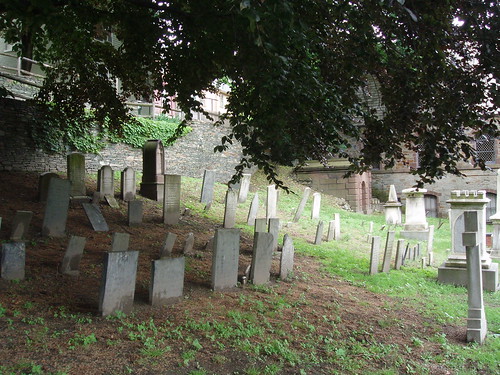 According to More Annotated Lovecraft (edited by S.T. Joshi and Peter Cannon), "Lovecraft liked to take visitors to St. John's churchyard at night, one of whom, an attractive young woman named Helen Sully, because so frightened when Lovecraft started to tell her ghostly stories that she fled from the place." 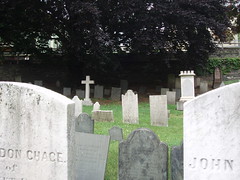 The graveyard also inspired Lovecraft's poem "In a Sequester’d Providence Churchyard Where Once Poe Walk’d," which is our Text of the Day. Be sure to note the first letter of each line of the poem.

Eternal brood the shadows on this ground,
Dreaming of centuries that have gone before;
Great elms rise solemnly by slab and mound,
Arched high above a hidden world of yore.
Round all the scene a light of memory plays,
And dead leaves whisper of departed days,
Longing for sights and sounds that are no more.

Lonely and sad, a specter glides along
Aisles where of old his living footsteps fell;
No common glance discerns him, though his song
Peals down through time with a mysterious spell.
Only the few who sorcery's secret know,
Espy amidst these tombs the shade of Poe. 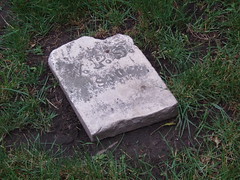 I'll leave you with a Poe pumpkin...