News the first: It appears the Man from U.N.C.L.E. film is going to happen helmed by Guy Ritchie, with Tom Cruise as Napoleon Solo and Armie Hammer (who soon will appear as the Lone Ranger to Johnny Depp's Tonto in the new The Lone Ranger film) as Illya Kuryakin. This story was first reported by Ain't It Cool News, but I'm afraid in this case that, no, this news ain't cool.* (See corroboration here, here, and here.) (Thanks to

st_crispins.) I should point out that this casting means - among many other and arguably more important things - that Solo is (now) 50 years old and 5'7" while Kuryakin is (now) 26 years old and 6'5", significant changes from the characters' previous near-equality on both counts.

It's not that I'm opposed to reboots - see my enthusiasm for J.J. Abrams' new take on Star Trek (which is my first and best fandom love) - but they are delicate things that must be done right. This news fails to inspire optimism.

News the second: In far happier, more hopeful news, last Saturday the great Cherokee actor Wes Studi was inducted into the "Hall of Great Western Performers" at the National Cowboy & Western Heritage Museum. Well deserved indeed. He's been one of my favorite actors ever since I was thirteen, when my parents took me to see the American Indian Theatre Company’s production of Black Elk Speaks (which also starred David Carradine and Will Sampson). I've followed his career with interest and appreciation over the years and even taught several of his films in my courses. Interestingly enough, he is only the second Native American to be inducted into the "Hall of Great Western Performers." The first was Jay Silverheels, who pioneered the role of Tonto in television opposite Clayton Moore's Lone Ranger. 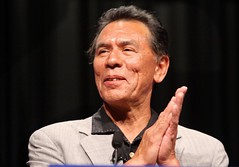 * Perhaps I should make some joke here about how Armie Hammer's apparently taken up the job of raping my childhood that George Lucas just vacated, but hey, it's too soon to make jokes, people.
Collapse