A concrete monument to H.P. Lovecraft's Azathoth has materialized inexplicably in front of an Oklahoma City restaurant -- one which, incidentally, my sister loves. It reads, "In the Year of Our Lord 2012 Creer Pipi claimed this land for Azathoth." The owners of said restaurant have no idea how it got there. Eldritch, eh? Why do mysterious concrete monuments to Lovecraftian gods of chaos never appear out of thin air in front of the restaurants I love? (On topic: "Claiming the Land for Azathoth: Lovecraftian Pranks and the Post-Modern Sacred.")

Another of my favorite authors was born on this day. Happy birthday to Mary Renault (4 September, 1905 – 13 December, 1983). She was a student of J.R.R. Tolkien, and years later he praised her novels and wrote to others how much he enjoyed them. They are amazing. 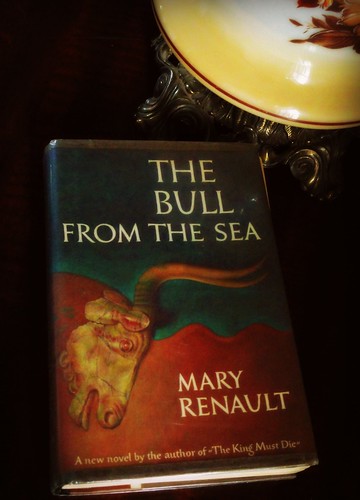 “Change is the sum of the universe, and what is of nature ought not to be feared. But one gives it hostages, and lays one's grief upon the gods. Sokrates is free, and would have taught me freedom. But I have yoked the immortal horse that draws the chariot with a horse of earth; and when the one falls, both are entangled in the traces.”
― Mary Renault, The Last of the Wine
Collapse