Things are going to get ugly in today's countdown. Quite ugly.

First published on 11 January, 1913, in The Cavalier, Irvin S. Cobb's "Fishhead (a.k.a. Blood-Brother Of The Swamp Cats)" is an ancestor to H.P. Lovecraft’s The Shadow Over Innsmouth.

In a letter published the same year, 22-year-old H.P. Lovecraft wrote this of "Fishhead": "It is the belief of the writer that very few short stories of equal merit have been published anywhere during recent years." Later, when composing his bibliographic essay "Supernatural Horror in Literature," Lovecraft described "Fishhead" as "banefully effective in its portrayal of unnatural affinities between a hybrid idiot and the strange fish of an isolated lake, which at the last revenge their biped kinsman’s murder." 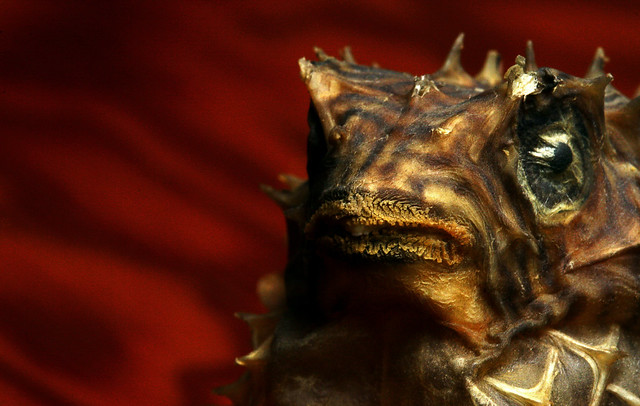 Here is a wonderfully eerie and atmospheric excerpt from Irvin S. Cobb's "Fishhead":

It goes past the powers of my pen to try to describe Reelfoot Lake for you so that you, reading this, will get the picture of it in your mind as I have it in mine.

For Reelfoot Lake is like no other lake that I know anything about. It is an after-thought of Creation....

Reelfoot is, and has always been, a lake of mystery.

In places it is bottomless. Other places the skeletons of the cypress-trees that went down when the earth sank, still stand upright so that if the sun shines from the right quarter, and the water is less muddy than common, a man, peering face downward into its depths, sees, or thinks he sees, down below him the bare top-limbs upstretching like drowned men's fingers, all coated with the mud of years and bandaged with pennons of the green lake slime.

In still other places the lake is shallow for long stretches, no deeper than breast high to a man, but dangerous because of the weed growths and the sunken drifts which entangle a swimmer's limbs. Its banks are mainly mud, its waters are muddled, too, being a rich coffee color in the spring and a copperish yellow in the summer, and the trees along its shore are mud colored clear up their lower limbs after the spring floods, when the dried sediment covers their trunks with a thick, scrofulous-looking coat.

There are stretches of unbroken woodland around it, and slashes where the cypress knees rise countlessly like headstones and footstones for the dead snags that rot in the soft ooze.

There are deadenings with the lowland corn growing high and rank below and the bleached, fire-blackened girdled trees rising above, barren of leaf and limb.

There are long, dismal flats where in the spring the clotted frog- spawn cling like patches of white mucus among the weed-stalks, and at night the turtles crawl out to lay clutches of perfectly, round, white eggs with tough, rubbery shells in the sand.

There are bayous leading off to nowhere, and sloughs that wind aimlessly, like great, blind worms, to finally join the big river that rolls its semi-liquid torrents a few miles to the westward.

So Reelfoot lies there, flat in the bottoms, freezing lightly in the winter, steaming torridly in the summer, swollen in the spring when the woods have turned a vivid green and the buffalo-gnats by the million and the billion fill the flooded hollows with their pestilential buzzing, and in the fall, ringed about gloriously with all the colors which the first frost brings-gold of hickory, yellow-russet of sycamore, red of dogwood and ash, and purple-black of sweet-gum.

But the Reelfoot country has its uses.