On this day in spooky history, the seeds of a curse -- or at least its legend -- were planted.

The story begins with tragedy. On this day in 1813, exactly two centuries ago, the great pan-tribal leader Tecumseh fell at the Battle of the Thames. His ally, a British major-general, abandoned him to their foes and was later court-martialed for the disgrace.*

The leader of the U.S. forces who slew Tecumseh was William Henry Harrison, a future president of the United States. Harrison died of pneumonia only a month after taking office. Zachary Taylor, who also fought against Tecumseh in the War of 1812, was likewise elected to the presidency -- and he also died in office.

The legend grew and evolved, ultimately suggesting that on the day Tecumseh perished, his brother Tenskwatawa (a religious leader known as The Prophet) had cursed both William Henry Harrison and future White House occupants who were elected during years with the same ending number as Harrison's election.

For the next 120 years, presidents elected during years ending in a zero (which happens every 20 years) died while serving in office. 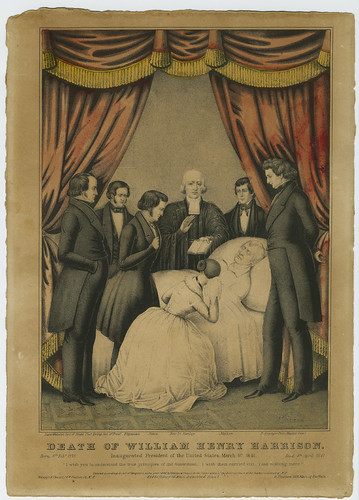 The election of 1980 "challenged" the curse; Ronald Reagan was seriously wounded by an assassination attempt while in office, but he survived.

The election of 2000 "broke" the curse; George W. Bush remained uninjured after an attempted assassination, when he was targeted while in office with a dud live grenade.

It's an eerie bit of history, isn't it?

Read more about the legend of Tecumseh's curse here.


* I find Tecumseh to be an important and fascinating figure, so much so that I wrote a biography of him for students.
On a related note, I'll be giving a talk about Tecumseh and his legacy (free and open to the public) at 10am on November 15 as part of the Native American History Month celebrations at Lenoir-Rhyne University.
Collapse