How about a real-life possible murder mystery for this day in spooky history?

You probably know of Meriwether Lewis as half of the leadership team that undertook the Lewis and Clark Expedition (1804-1806), the first American expedition to cross what is now the western portion of the United States, departing St. Louis on the Mississippi River and crossing westward through the continental divide to reach the Pacific coast.

For well over a century and a half, the traditional story ran that, after the expedition's completion and his appointment as Governor of Upper Louisiana, Lewis succumbed to severe depression and ultimately committed suicide, shooting himself on the perilous Tennessee trail known as the Natchez Trace. He was only 35 years old. A monument to the man's brief but remarkable career -- a broken column, a symbol of a life cut short too soon -- remains in his honor.

Today a number of historians, researchers, and family descendants believe that Lewis in fact was murdered on this day in 1809. 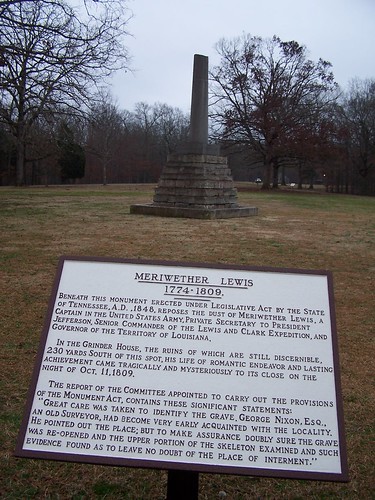 "That afternoon Governor Lewis came to a pair of roughly hewn log cabins with a passageway between. He rode up and inquired of the mistress if it was a public house. She affirmed this and he asked for lodging which she provided in the cabin across from hers. Mrs. Grinder was there alone with her children because her husband was away (depending on which version of the story, at another farm of theirs or hunting). She cooked dinner for the governor who ate with her and her family (and, according to one account, the servants were there too). Mrs. Grinder later commented that his behavior was odd for he would pace and then sit and talk 'like a lawyer.' He asked for liquor but drank little. Pernier and Neelly's servant appeared sometime (or were already there) and bedded down (in the stable or in Lewis's cabin).

Later that night shots rang out (two, or was it three?). A short time later Mrs. Grinder heard a noise outside as though someone were crawling. Then Lewis's voice cried begging for water. Fearful that danger lurked in the dark, Mrs. Grinder refused his request and kept the door closed. She did, though, peer between the chinks in her door and witness the Governor of Upper Louisiana pitifully scraping the empty water bucket then painfully dragging himself back to his cabin.

Once day broke Mrs. Grinder said she went to visit him (presumably finally to give him some water) and found him wounded in the head and chest. The servants (one or both of whom may or may not have been present in the cabin or asleep in the barn) claimed he had said, 'I have done the business.' He complained that because he was so strong it took him so long to die. Lewis breathed his last early that morning.

Some time later James Neelly arrived. The only contemporary written account of this tragic event comes from his pen. Of course he was not present at the time, but gives the servants and Mrs. Grinder as the source. Neelly wrote the news to Jefferson and apparently, to others, as well. He announced that Lewis's death was a suicide. Both Clark and Jefferson readily accepted the verdict citing their friend's melancholy frame of mind. One who disputed Neelly's word was Captain Russell, who insinuated that Neelly may have been responsible for the governor's death. Further, each time Mrs. Grinder related the story, it changed a bit. However, regardless of which version of the story you believe at the very least, Meriwether Lewis appears as one of the most inept suicides ever.

Here is an expert in firearms who bumbles along, shooting his head ('grazing' it or blowing away a 'piece of his forehead') then his chest (side, back, or abdomen and possibly stopping to reload since Mrs. Grinder said there were three shots from his two single-shot pistols). He then crawls to the next cabin to beg for water, and crawls back to his cabin before lingering for several more hours in agony. Incredibly, some stories depict the medical officer of the Lewis and Clark expedition now unable to locate any vital artery as he slashes himself wildly with his razor before he finally perishes. This is the version that many claim is the most plausible explanation for Lewis's death." 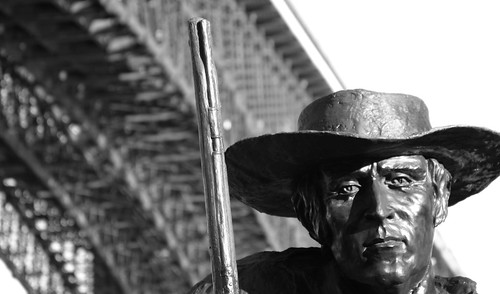 Although the government has recently (2010) turned down requests by family descendents for an exhumation and study of Lewis's body, DNA tests of his Masonic apron (conducted by forensic scientist Scott Walter for an episode of the 2013 series America Unearthed) reportedly found bloodstains from two different individuals -- neither of them Lewis.