Today's post continues my observance of the 125th anniversary of the Autumn of Terror, and it also offers another "This Day in Spooky History" installment of my Halloween countdown.

On this day in 1888, George Lusk, then the head of the Whitechapel Vigilance Committee in London, received a package containing a letter allegedly written by the serial killer known as Jack the Ripper. The missive later became known as the "From Hell Letter." It was accompanied by a small box containing half of what doctors later determined was a human kidney, preserved in ethanol, which may have been taken from Ripper victim Catherine Eddowes. Many investigators, researchers, and historians agree that, of the many so-called "Ripper letters," this is the one most likely to have been penned by the real murderer. 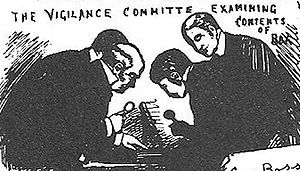 The letter read as follows (sic):

Sor
I send you half the Kidne I took from one women prasarved it for you tother piece I fried and ate it was very nise. I may send you the bloody knif that took it out if you only wate a whil longer.

signed
Catch me when
you Can
Mishter Lusk. 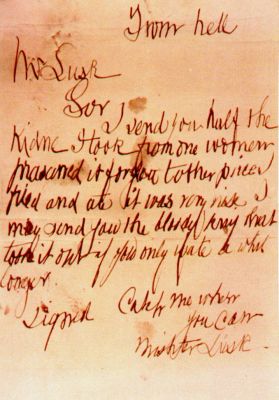 * Read more about the alleged Ripper letters here at Casebook: Jack the Ripper and here at Wikipedia.
* Read reviews of Jack the Ripper: Letters from Hell (by Stewart Evans and Keith Skinner, 2001), which reproduces and transcribes the letters (mis)attributed to Jack the Ripper, including the 'Dear Boss' correspondence and the 'From Hell' letter. "The authors relate the letters to the complete story of the Whitechapel murders, tracing the hysteria and misconceptions that dogged both the police and Fleet Street during 1888-9 and providing revealing insights into the Victorian psyche. For the first time the cases of three people arrested by the police for sending 'Jack the Ripper' letters are explored, including that of Maria Coroner, the attractive 21-year-old Bradford girl. Evans and Skinner also examine the letters of seven suspects, including Dr. Roslyn D'Onston Stephenson and Nikaner Benelius. The story of the Ripper letters ends by posing a controversial question: was Jack the Ripper merely a press invention?"
Collapse