On this day in 1847, according to Charlotte Brontë's letters, she received her author's copies of her newly-published work, one of the greatest of Gothic novels, Jane Eyre (credited to Brontë's pseudonym, Currer Bell). Secrets and disguises, fire and death, a sadistic boarding school and a madwoman in the attic: what could be more appropriate for Halloween? 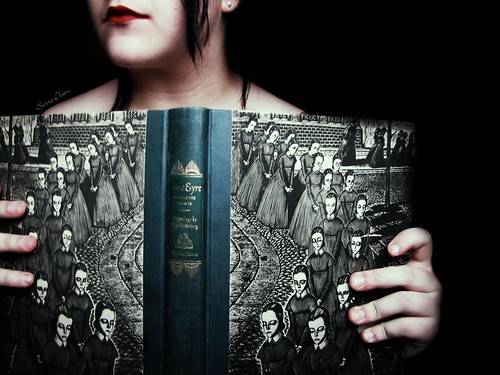 Here is an eerie excerpt, describing how Jane as a little child was cruelly punished by being locked in the singularly spooky "red-room":

“God will punish her: He might strike her dead in the midst of her tantrums, and then where would she go? Come, Bessie, we will leave her: I wouldn’t have her heart for anything. Say your prayers, Miss Eyre, when you are by yourself; for if you don’t repent, something bad might be permitted to come down the chimney and fetch you away.”

They went, shutting the door, and locking it behind them.

The red-room was a square chamber, very seldom slept in, I might say never, indeed, unless when a chance influx of visitors at Gateshead Hall rendered it necessary to turn to account all the accommodation it contained: yet it was one of the largest and stateliest chambers in the mansion. A bed supported on massive pillars of mahogany, hung with curtains of deep red damask, stood out like a tabernacle in the centre; the two large windows, with their blinds always drawn down, were half shrouded in festoons and falls of similar drapery; the carpet was red; the table at the foot of the bed was covered with a crimson cloth; the walls were a soft fawn colour with a blush of pink in it; the wardrobe, the toilet-table, the chairs were of darkly polished old mahogany. Out of these deep surrounding shades rose high, and glared white, the piled-up mattresses and pillows of the bed, spread with a snowy Marseilles counterpane. Scarcely less prominent was an ample cushioned easy-chair near the head of the bed, also white, with a footstool before it; and looking, as I thought, like a pale throne.

This room was chill, because it seldom had a fire; it was silent, because remote from the nursery and kitchen; solemn, because it was known to be so seldom entered. The house-maid alone came here on Saturdays, to wipe from the mirrors and the furniture a week’s quiet dust: and Mrs. Reed herself, at far intervals, visited it to review the contents of a certain secret drawer in the wardrobe, where were stored divers parchments, her jewel-casket, and a miniature of her deceased husband; and in those last words lies the secret of the red-room — the spell which kept it so lonely in spite of its grandeur.

Mr. Reed had been dead nine years: it was in this chamber he breathed his last; here he lay in state; hence his coffin was borne by the undertaker’s men; and, since that day, a sense of dreary consecration had guarded it from frequent intrusion.

My seat, to which Bessie and the bitter Miss Abbot had left me riveted, was a low ottoman near the marble chimney-piece; the bed rose before me; to my right hand there was the high, dark wardrobe, with subdued, broken reflections varying the gloss of its panels; to my left were the muffled windows; a great looking-glass between them repeated the vacant majesty of the bed and room. I was not quite sure whether they had locked the door; and when I dared move, I got up and went to see. Alas! yes: no jail was ever more secure. Returning, I had to cross before the looking-glass; my fascinated glance involuntarily explored the depth it revealed. All looked colder and darker in that visionary hollow than in reality: and the strange little figure there gazing at me, with a white face and arms specking the gloom, and glittering eyes of fear moving where all else was still, had the effect of a real spirit: I thought it like one of the tiny phantoms, half fairy, half imp, Bessie’s evening stories represented as coming out of lone, ferny dells in moors, and appearing before the eyes of belated travellers. I returned to my stool.

* Read the complete novel here.
* There are two different downloadable audiobooks of Jane Eyre at Librivox, here and here. 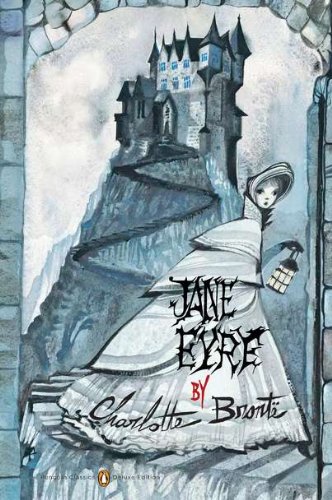