One of the new Mickey Mouse series of shorts inspired by the classic 1930s-era Disney shorts is a Halloween-themed film called "Ghoul Friend." After his car breaks down, Mickey is pursued by a hideous ghoul! Check out Mickey Mouse in "Ghoul Friend" here at YouTube. (Thanks to

The site of nature claiming a grave is endlessly fascinating and moving, I think. 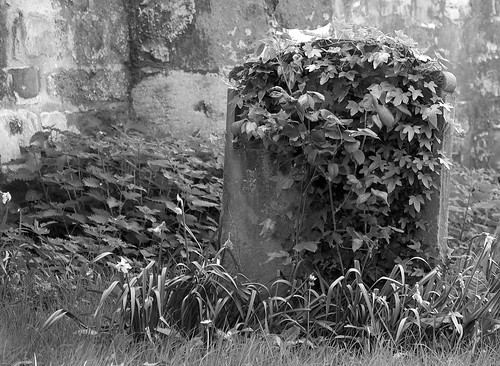 quietselkie, who properly calls this "a ghost story buried in folklore buried in magic," I bring you a short and haunting read: "The Valley of the Demon" by Alan Garner (1934-present).

Here is a teaser:

In my physical youth I was an athlete, and, to pursue strength, I would take myself off to the southern Pennines, and there I would lope. On the afternoon of 19 July 1952, I was running across a moor at a height of about thirteen hundred feet. Ahead of me was a dry-stone wall. On the other side was a deep lane.

I slid down the bank. My bottom passed over something smooth and hard. When I hit the lane I turned, and parted the grass.

A memorial stone was set into the bank: “Here John Turner was cast away in a heavy snowstorm in the night in or about the year 1755.”

The stone was weathered, but legible. I began to clear away the grit. I arrived at the inner corner, and felt for the rear. It should have been roughly dressed. Instead, the back had been as finely worked as the face. This was not only irrational, but would have added to the cost. It was, after all, no more than a hidden memorial in a lonely place. If it had merited such work, why was there imprecision about the date, “in or about the year 1755?” I continued, turning my arm at an ever more awkward angle.

In the late of late afternoon, my arm jammed. I couldn't move. I became aware of the time, the distance, the isolation, the silence. I tried not to hyperventilate. At last, I found a direction of give. I worked my arm and was able to start to retract it. Then my fingers met a line in the surface of the stone. They “read” the letter D. It was unweathered. It had not been exposed. Much later, having extricated my arm, cleared a space, and wound my hand back in, I'd traced what was carved on the hidden reverse:

“The print of a woman's shoe was found by his side in the snow where he lay dead.” 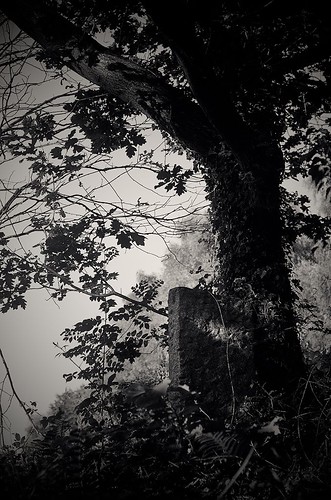