I'm back from Hogwarts Agnes Scott College, where I had a fantastic time lecturing. My colleagues redefined the word "brilliant": Daniel J. D'Amico convinced me that Alexis de Tocqueville would've loved the second season of The Walking Dead; James Padilioni, Jr.'s economic analysis of the Savoy Ballroom's history gave me a new heroine to research (Ada "Bricktop" Smith); and Robert Anthony Peters reminded me how many different and valuable lessons fairy-tales may teach us. The students were equally great. 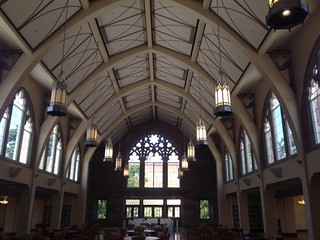 In other news...
* The first issue of The Signum Eagle, the newsletter of Signum University, is online now. Check it out! I'm grateful to Curtis Weyant, who wrote a great piece on my upcoming trip to Loncon 3/Worldcon.

* What exhibits would you most like to see at the new Museum of Science Fiction? This survey is your chance to tell the organizers!

I'm going to disappear now into a world of class and departmental preparation, so I can have "Science Fiction, Part I: From Modern Beginnings through the Golden Age," "Monsters and Mad Science," and other parts of my fall semester ready to go before I head off to London.


... One last note: in honor of my new UK blu-ray set of the first season of The Professionals, I'm revisiting the tie-in novelizations. (Apparently "Ken Blake" was a pseudonym for the science fiction author Kenneth Bulmer. How cool is that? I learn something new every day!) Here's a passage that sends me swimming in nostalgic delight.

"Anything -?" Cowley started to say. Then he gripped his leg, chopping his words off. The pain in the man got to Doyle and Bodie. They could feel the agony themselves, clawing and torturing them. Cowley's lips turned white. He held on. Doyle took the chief's glass, refilled it, handed it across without a word. Cowley drank, fighting the pain. He sat back and took a breath, looking up at the other two members of the team.

Bodie said savagely: "You should have it out, sir. The bullet in your leg. Get shot of it."

"Oh, they can do that, all right. They're wonderful, these days, so they tell me. But they can't -" Here a fresh bout of pain took him, and his voice trembled, before he fought it down and continued, grating the words out like a gravel-dredger biting rock. "But they can't guarantee they won't have to take the leg with it. What would you do?"

The answer appeared to amuse George Cowley, somewhere in that devious brain of his, and the three men continued to drink slowly as what Billy Turner had spilled out digested itself along with the Scotch. - Where the Jungle Ends (The Professionals #1), Ken Blake
Collapse