I had a marvelous time at this year's Worldcon (which, the last I heard, was in the running to be the largest Worldcon in the event's 72-year-history with well over 10,500 attendees).

Some of the highlights of the con for me were the following.

- Meeting in person several of the StarShipSofa crew with whom I've worked for the last six plus years, including Tony C. Smith, Diane Severson Mori, Steve Bickle, and others, as well as many of our long-term listeners.

- Attending the 1939 Retro Hugo Awards Ceremony, which was presented like a 1939 radio broadcast, complete with a live band, ads, and breaks for newsflashes about approaching Martians. (Fortunately for us, the "con crud" killed the invaders before they penetrated the ExCel Centre where the ceremony was being held.) It was a loving extended tribute to Orson Welles' adaptation of The War of the Worlds, beautifully realized. My friend Diane Severson Mori, who was representing Amazing Stories editor Raymond Palmer (who was nominated for Best Editor), kindly invited me to be her "plus one," so I also got to see the other representatives at the pre-awards reception and enjoy the ceremony from choice seating. It was moving for me to see classic works I've loved and taught honored in this way.

- Officiating at the Prometheus Awards ceremony, where it was my privilege to present "Best Novel" awards to Cory Doctorow (for Homeland) and Ramez Naam (for Nexus), both of whom gave stirring speeches, and a "Special Award" to the representative of Leslie Fish (for her novella “Tower of Horses” and her related filk song, "The Horsetamer’s Daughter"), as well as to accept on behalf of Lois McMaster Bujold the "Hall of Fame" honor for her novel Falling Free.

- Giving my two talks, "Sherlock Holmes and Science Fiction" and "Millennials and Worlds Gone Wrong: These Aren't Your Grandparents' YA Dystopias." I'm grateful to A.J. Hall for her wonderful (and hilarious) introduction to my Holmes talk, and to everyone who attended - even those several dozen who were turned away after the doors were closed due to overcrowding. (What a turnout! I was amazed.) I'm also grateful to the many who came to my YA dystopias talk and stayed with me, contributing great comments and questions, even though the tech specialists were unable to get my PowerPoint up and running. (So it goes...)

- Participating in stimulating and thought-provoking panels. It was great fun to sit side-by-side and converse with some truly gifted authors, scholars, and journalists. I particularly enjoyed the "Young Adult SF on the Big Screen" panel, where we had just the right balance of agreement and disagreement to make for a vigorous and fruitful discussion. I also attended several excellent panels as an audience member. Two of the standout examples were "My Beautiful Dystopia" (with a stellar panel of authors including the always-awesome Peadar O'Guilin) and "Reluctant, or Just Not Interested?," a panel about reluctant readers, the education system, and publishing, which featured more terrific guests (including Gray Rinehart, whose appearances are always "must sees").


Here's my obligatory selfie with my Loncon 3 badge, taken just before the Retro-Hugo Awards ceremony, and a photo of the ExCeL Centre at the Docklands, where the con was held. 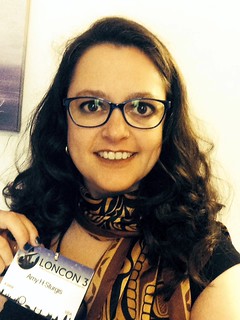 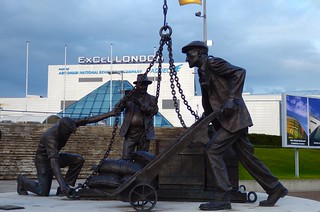 Click here for my photos from Loncon 3/Worldcon, including close-up pictures from the "50 Photos for 50 Years of Doctor Who," "A Brief History of Worldcon," and "The Destruction of London" special exhibits.

My next con appearance is in September at A Long-Expected Party. At this point I'm not sure about next year's Worldcon, but I know I will be attending MidAmeriCon II/Worldcon in 2016.
Collapse