* A book is getting ready to hit shelves that claims new forensic evidence (including a fresh DNA analysis) proves that Aaron Kosminski was Jack the Ripper.

I don't really have a horse in this race, as I don't have a "pet suspect" in whom I'm invested, but Kosminski as the culprit certainly would not be surprising to me. There are very good reasons to be skeptical about this book's claims, however. Until I've had a chance to read this book critically, I'll be minding the reviews and keeping a close eye on the (already twelve-page) discussion unfolding about it at the Casebook.org forum.

- Incidentally, the best book I've read thus far on Kosminski as a suspect is Robert House's 2010 Jack the Ripper and the Case for Scotland Yard's Prime Suspect.

- In addition, Kosminski's asylum records will be opened to researchers in 2019, which should yield some new insights. 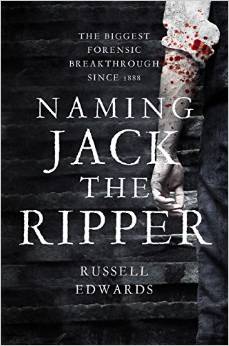 * In unrelated news, the University of Oklahoma Libraries is inviting members of the public to help transcribe U.S. Civil War documents. Join University Libraries in commemorating the 150th anniversary of the U.S. Civil War by transcribing a Civil War diary and letters. Your transcriptions will make these manuscripts more accessible to researchers everywhere! Click here for more information.
Collapse