I have a spooky tale for you today, straight from my own backyard!

Brown Mountain, which is found in the county next to ours in the Blue Ridge Mountains, has long been the home of ghostly lights. Called the "Brown Mountain Lights," these mysterious glowing lights - most prevalent in September, October, and November - have been the source of government and private investigations, news reports, folklore, and music, television, and film. The first documented sighting took place on September 24, 1913, as reported in the Charlotte Daily Observer, but anecdotal accounts and oral history predate this report by many years. 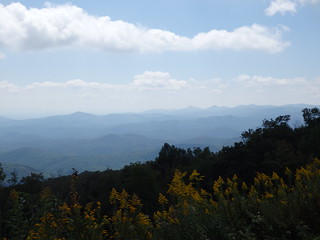 Here are some sources about the Brown Mountain Lights:

* Faculty and students from Appalachia State University maintain this website about the Brown Mountain Lights.

* This YouTube clip includes footage from Charlotte TV and National Geographic TV of and about the lights.

* This YouTube clip includes footage of the lights shot with night vision for the National Geographic TV program Paranatural. 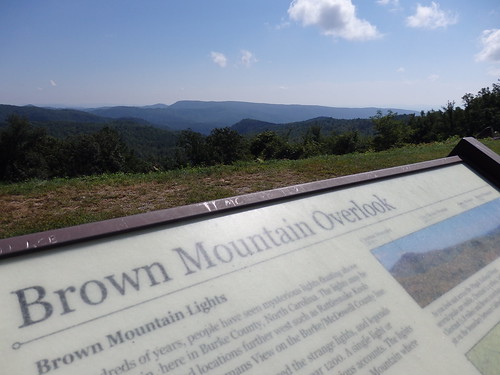 Here are some of the fictional works inspired by the Brown Mountain Lights:

* Scotty Wiseman's song "Brown Mountain Lights" attributes the lights to the lantern of a ghostly slave searching for his long-lost owner. Hear it performed by Tony Rice on YouTube. (Note: Another local folktale claims the lights are a Cherokee woman searching for her dead lover.)

travels_in_time pointed out that the 1968 novel Escape to Witch Mountain by Alexander H. Key (which has inspired several movie adaptations) mentions the Blue Ridge Mountains specifically and tells of mysterious lights and music coming from a particular mountain. Further research confirms that Key did, in fact, base Witch Mountain on Brown Mountain! How cool is that?

* The 2014 film Alien Abduction - which is very much worth watching if you like such movies - credits aliens with the lights. It was filmed in and around this area. Here's a Dread Central interview with director Matty Beckerman, who claims to have seen the lights himself.