Who is Emma Crawford, you ask?

Here's the official story from the Emma Crawford Festival website: "Emma came to Manitou Springs for the miracle mineral springs in 1889. She was diagnosed with tuberculosis, which back then was a death sentence. Unfortunately, she lost her battle on December 4, 1891. Her dying wish was to be buried on top of Red Mountain. Her fiance, William Hildebrand (a civil engineer on the Pikes Peak Cog Railway), and eleven other men carried her body up the 7,200 ft. slope. In 1929, after years of stormy weather, her remains washed down the side of the mountain. Only her casket handles, a nameplate and a few bones were found. Some say she haunts Red Mountain.

"Emma was buried some years later in Manitou Springs' Crystal Valley Cemetery in an unmarked grave. A Memorial Stone was erected in 2004 by Historic Manitou Springs, Inc. (which operates the Manitou Springs Heritage Center) to honor her life.

"Now, the townspeople honor her every year in late October with The Emma Crawford Festival."

And what do the good people in Manitou Springs do at the Emma Crawford Festival, you ask?

They have a parade. They wear costumes. THEY RACE COFFINS. Each team is required to have an Emma in the coffin, and the race is entirely uphill. The fastest teams compete in the finals.

May Emma Crawford rest in peace, and may all of today's competitors at the 20th annual memorial race be swift of foot and coffin. (Special thanks to 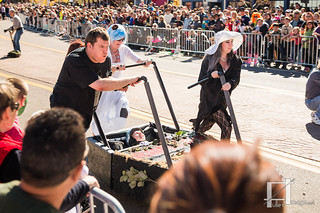 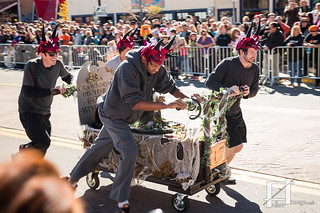