Mental_floss has an eerie list of "7 Weird Graveyard Inventions" just in time for Halloween.

My quotes for the day come from Forever Knight - do you remember that? - the series that ran from 1992-1996 about the vampire Nick Knight (Geraint Wyn-Davies) who tries to redeem his past actions while serving as a policeman in Toronto. All were spoken by the wonderfully wicked character Lucien Lacroix (Nigel Bennett), Nick's 2,000-year-old vampire master.

"They say no two persons are alike. Never is that more true than when it comes to our desires. Some cherish what others abhor. One man's precious cargo is another man's poison. Some prize what others revile. Prize what you will, prize what you can, but always remember, even he who dies with the most prizes still dies."

"If you love something, let it go. If it doesn’t return... hunt it down and kill it." 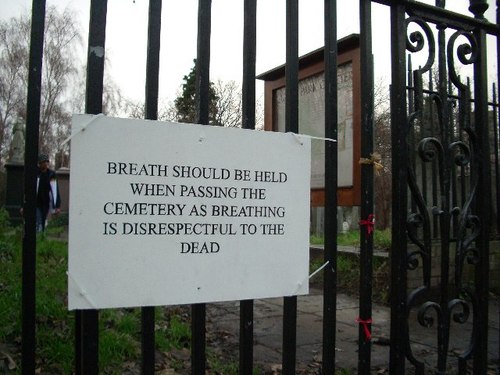 "A ghost is a hallucination of some famous regret, no more. Ghosts are mistakes that we have made. They come not from beyond the pale, but rise up from our gravest doubts about ourselves. Each ill-considered thing that we have done is a ghost that haunts us. If we let it."
Collapse