It's list time again! Here are my picks for the spooky podcasts you don't want to miss this Halloween.

In no particular order...

* The H.P. Lovecraft Literary Podcast: In each weekly podcast, Chris Lackey and Chad Fifer discuss a specific H.P. Lovecraft story – what it’s about, how it reads, why it may have been written and what other works of art it’s influenced. Since concluding Lovecraft’s stories, they’ve been covering other weird fiction that inspired the author, mostly those referenced in his essay "Supernatural Horror in Literature." They regularly have talented guest readers and contributing composers for their music sections. The majority of the Lovecraft episodes are free. Three of the four monthly episodes are now subscription-only, but they are well, well worth the modest cost. This month is "Bloch-tober," focusing on the work of Lovecraft Circle member Robert Bloch.

gods_lil_rocker just put this on my radar, and I'm grateful! Each week the co-hosts discuss a particular horror movie or horror-themed TV episode from the Retroist Vault for your listening enjoyment. This will put you in the Halloween mood for certain.

* Interference by Eric Luke: Another of my brilliant graduate students, April, just suggested this to me, saying it's oh-so-Lovecraftian, so I'm downloading it now. Described as "an experiment in audio horror" (oh yeah!), here's the tantalizing official blurb: "SOMETHING wants in. To your head. Through this audiobook. Ethan, a digital sound engineer in Los Angeles, becomes aware that his life is unraveling when the audiobook he's listening to reveals his deepest, darkest secrets, escalating until the narrator addresses him directly, threatening to destroy him from within. Vivian, a single mother running an antique store in San Francisco, listens to her audiobook to distract herself from missing her young daughter, but is shaken when the narrative is interrupted by her daughter's voice, faintly calling for help. Ethan and Vivian are drawn together as they fight to solve a generation-spanning conspiracy that begins with a boy listening to the Orson Welles broadcast of War of the Worlds in 1938 and evolves through the latest innovations in digital technology..."

* Kat & Curt's TV Re-View: In this weekly podcast, bloggers Curtis Weyant and Katherine Sas introduce Buffy the Vampire Slayer or Angel and Doctor Who to each other, watching one episode of each per week, sharing fannish delight and critical analysis. Curt, a long-time Whedon devotee and scholar, introduces the show to Kat, and newly-certified Whovian Kat acquaints Curt with the Doctor. Join them for a journey through time, space, and Sunnydale as they battle demons, aliens, and the inscrutable process of creating quality narrative television.

* Tales to Terrify: This weekly audio magazine is one of StarShipSofa's siblings in the District of Wonders. I'm terribly saddened to say that we lost our friend and comrade, author and host Larry Santoro ("the Vincent Price of podcasts!"). He is greatly missed. But the podcast continues to soldier (lurch? stagger? insert your scary verb here) on in his memory. It includes the best of contemporary horror fiction and nonfiction. (I have narrated three haunting stories for this podcast. Follow the links to hear my reading of “After the Ape” by Stephen Volk, my reading of “Jewels in the Dust” by Peter Crowther, and my reading of “Payback” by P.D. Cacek.)

* MonsterTalk: This is the science show about monsters — a free audio podcast that critically examines the science behind cryptozoological (and legendary) creatures, such as Bigfoot, the Loch Ness Monster, and werewolves. Hosted by Blake Smith, Ben Radford, and Dr. Karen Stollznow, MonsterTalk interviews the scientists and investigators who shine a spotlight on the things that go bump in the night. The episode airing dates average out to mean a new show once a month, sometimes more. (Thanks to

ankh_hpl for introducing me to this great show.)

* Atlanta Radio Theatre Company: Founded in 1984, ARTC is a staple at venues such as Dragon*Con and has a standing program year-round, performing adaptations of works by authors such as H.P. Lovecraft and H.G. Wells live. ARTC podcasts its fantastic productions.

* Pseudopod: One of the oldest horror podcasts and still one of the best, Pseudopod presents fine short horror in audio form weekly.

* Skeptoid: This podcast shines the lights of logic and reason into the dark shadows. Each weekly episode focuses on a single phenomenon — an urban legend, a paranormal claim, etc. — that you may have heard of, and it explains the factual scientific reality. To put it another way, we the listeners are Fox Mulder, and Skeptoid kindly serves as our Dana Scully.

* Welcome to Night Vale: This is a twice-monthly podcast in the style of community updates for the small desert town of Night Vale, featuring local weather, news, announcements from the Sheriff's Secret Police, mysterious lights in the night sky, dark hooded figures with unknowable powers, and cultural events. Think Lake Woebegone meets Stephen King. (It's

And guess what? Welcome to Night Vale's novel is coming out on October 20! 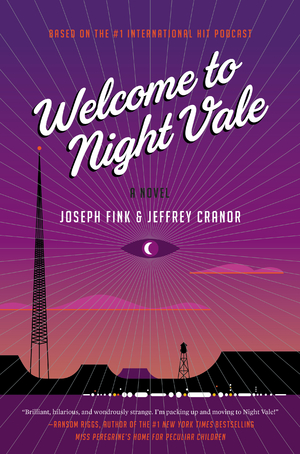 “The Night Vale medical board has issued a new study indicating that you have a spider somewhere on your body at all times, but especially now. The study said the further research would be needed to determine exactly where on your body the spider is and what its intentions are. Only that it is definitely there and is statistically likely to be one of the really ugly ones."
- Welcome to Night Vale

“Good things come to those who wait. But so do really malevolent and scary things. In fact, probably more of those. Better keep moving.” - Welcome to Night Vale

“Big news in the science world! Scientists announce that they have discovered the world’s deadliest spider — a previously unknown species that is as hard to spot as its bite is hard to survive. Apparently the specimen was found when your dead body was examined. They say you were a portrait of agony, your skin a myriad of pulsing, angry colors and... Oh... You know what? I’m sorry. This report is from next week. Aw, things have gotten so confusing ever since the wire services started using time machines. Never mind. No need to worry about that report for a few days.” - Welcome to Night Vale

What other spooky podcasts do you recommend?
Collapse