"Historic places are imbued with legends too, and (possibly) true stories. It seems that Lord Scarsdale of Sutton Scarsdale Hall in Derbyshire was so appalled by the execution of King Charles I that he had his grave dug in the grounds of the Hall and went and lay in it every Friday to reflect on the sorry state of earthly affairs. The 'licking stones' in the dungeon at Carlisle Castle are said to have been worn away by the tongues of countless prisoners whose only means of easing their thirst was to suck at the moisture running down the walls. The body-shaped lead coffins still to be seen in the little chapel at Farleigh Hungerford Castle -- among them presumably mothers who died in childbirth, entombed with the tiny coffins of their babies on top of them -- were once real people with real lives. Who were they? What were their names? And why are their coffins still lying there in that small, semi-public place, after so many centuries?"

- from This Spectred Isle: A Journey through Haunted England written by Val Horsler and Susan Kelleher 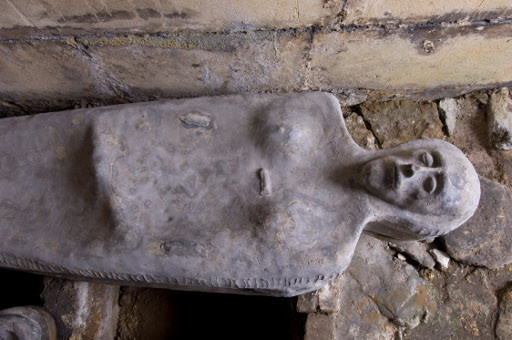