If you're looking for brand new books to read for this Halloween season, I've just read two very recent ones that I highly recommend.

If you're interested in non-fiction, check out The Witch of Lime Street: Séance, Seduction, and Houdini in the Spirit World by David Jaher, which explores a controversial contest during the height of the 1920s Spiritualism craze sponsored by Scientific American. This contest offered a large cash prize to the first medium declared authentic after passing rigorous scientific investigation conducted by its impressive committee of five judges. This has it all: Sir Arthur Conan Doyle, Harry Houdini, and the woman who was at the height of her fame viewed as the most credible medium in the United States. Read my review here.

If you're interested in fiction, check out Dark Equinox and Other Tales of Lovecraftian Horror by Ann K. Schwader (

ankh_hpl). This is a stunning collection of beautiful and haunting weird fiction, half standalone stories and half interconnected tales. There's no weak link in this chain; each tale is dark, rich gem in which the Outside breaks through into our world. Read my review here. 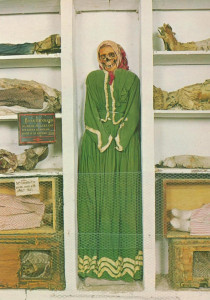 "Women's Corridor" by Sibeaster. Licensed under Public Domain via Commons.

Listening to the Skeptoid podcast (which I highly recommend) reminded me of its Episode 323: "Eight Spooky Places, And Why They're Like That." Here is the Skeptoid's -- that is, Brian Dunning's -- list of spooky places.

For full descriptions and explanations of these eerie locales, check out the transcript of this podcast episode. 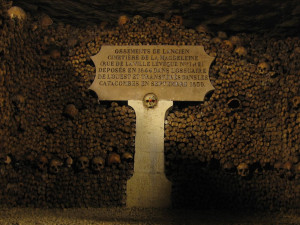 * Aokigahara, or the Suicide Forest (Japan)
I think "Suicide Forest" says it all.
* The Catacombs of Paris (France)
One word: skulls.
* The Grounds and Catacombs of Kensal Green Cemetery (England)
There's something about the way the ground rolls and pitches and seems to be vomiting up the stones and coffins.
* Westminster Burial Ground and Catacombs in Baltimore (United States)
The church was built over the original burial ground to discourage graverobbing. I was fortunate to get the "special tour," which included folding myself double and shuffling in alone where the expert tour guide no longer will go, into the all-but-buried (pardon the pun) Robb family grave area. It was comforting to know Edgar Allan Poe was nearby. My photos don't do the experience justice, but they are here.


Okay, your turn. What other places are spooky, and how did they get that way?
Collapse