Apologies for being quiet of late. I've been dealing with both shingles and sinus-related nastiness for which surgery looms in 2016. Ick. I do hope your holiday season has been more enjoyable! 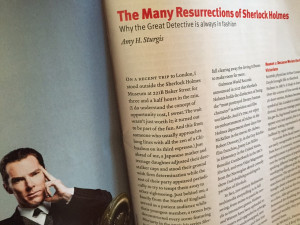 * [Note: Also written in 2015 and accepted for 2016 publication: “His Fordship in the Capitol and Big Brother in the Districts: The Hunger Games and the Modern Dystopian Tradition” in Critical Insights: The Hunger Games, Lana A. Whited, ed., Grey House/Salem Press, forthcoming in 2016]

* “The Many Resurrections of Sherlock Holmes: Why the Great Detective Is Always in Fashion,” Reason (October 2015) online here