My heart and my thoughts are with my hometown of Tulsa and my next-door neighbor city of Charlotte today. 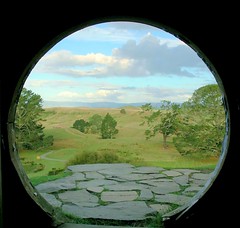 Today is the anniversary of the Long-Expected Party celebrating the eleventy-first birthday of Bilbo Baggins and the coming of age of Frodo Baggins in The Lord of the Rings. It was on this day that Bilbo gave his infamous birthday speech, saying "I don't know half of you half as well as I should like, and I like less than half of you half as well as you deserve," before disappearing from the Shire forever.

Also on this day, according to the Appendices of The Lord of the Rings, 99-year-old Samwise Gamgee rode out from Bag End for the final time. He was last seen in Middle-Earth by his daughter Elanor, to whom he presented the Red Book. According to tradition, he then went to the Grey Havens and passed over the Sea, last of the Ringbearers.


And now, in honor of the Baggins Birthdays, the departure of Samwise, and Hobbits in general, a quote about the Ring's temptation of - and failure with - one of J.R.R. Tolkien's (and, for that matter, world literature's) greatest heroes, Samwise Gamgee:

"Wild fantasies arose in his mind; and he saw Samwise the Strong, Hero of the Age, striding with a flaming sword across the darkened land, and armies flocking to his call as he marched to the overthrow of Barad-dûr. And then all the clouds rolled away, and the white sun shone, and at his command the vale of Gorgoroth became a garden of flowers and trees and brought forth fruit. He had only to put on the Ring and claim it for his own, and all this could be. In that hour of trial it was the love of his master that helped most to hold him firm; but also deep down in him lived still unconquered his plain hobbit-sense: he knew in the core of his heart that he was not large enough to bear such a burden, even if such visions were not a mere cheat to betray him. The one small garden of a free gardener was all his need and due, not a garden swollen to a realm; his own hands to use, not the hands of others to command."
- J.R.R. Tolkien, The Lord of the Rings: The Return of the King
Collapse