In past Halloween countdowns, I've looked at some regional legends related to places I've lived. To recap, here are those posts:
From my home state of Oklahoma: The Boggy Creek Monster
From the state of Tennessee, where I lived for 17 years: The Bell Witch
From western North Carolina, where I live now: The Brown Mountain Lights

Now I find myself -- along with many others in several states -- in the midst of the Great Clown Panic of 2016. (Seriously?)

Here's what stared at me from the front page of my daily paper recently. 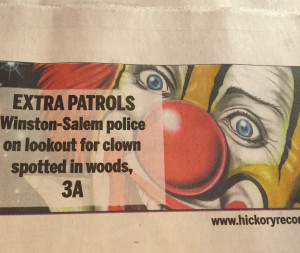 From Adam K. Raymond at the Daily Intelligencer, here's a recent update: "Creepy Clowns Are Still Terrifying People Across the South."

What do we know? We know that evil clowns are a thing, both in real life (think John Wayne Gacy) and in many, many forms in fiction, from the Joker himself (who first appeared in 1940) to Twisty the Clown in American Horror Story: Freak Show (2014-2015). This brings up a question I'd like to ask all of you. What's the first thing you think of when "evil clown" is mentioned?

I immediately think of the clown doll in 1982's Poltergeist. Aside from the Joker, I think that was my first encounter with the evil clown phenomenon.

We also know that fear of clowns is prevalent enough to warrant a term: coulrophobia.

As the Great Clown Panic continues, I recommend checking out the documentary Killer Legends (2014). (We streamed it from Netflix.) This film examines the origins of four urban legends, the last of which is the evil clown panic/phantom clown phenomenon, which can be traced back in the United States almost four decades. There's some fascinating material in the analysis. Here's the trailer.

And there's this new article from Jesse Walker, also worth a look: "Friday A/V Club: A Short History of Phantom Clowns: This isn't our first freakout about imaginary Bozos."

I'll leave you in the very capable hands of Elizabeth Nolan Brown in "Can Creepy Clowns Be Stopped?" from Reason's "Hit and Run" Blog:

"They're roaming the streets, stalking our farmer's markets, diminishing our helium supply...and yet police say there's no way to stop the nomadic, peaceful-but-creepy clown menace.

"One serious hindrance to law enforcement has been the fact that these clowns, often, do not literally exist. Or, if they do, no tangible evidence of their existence can be found. But that doesn't make them any less real to the residents of places like Greenville, South Carolina, where media is now warning that candy-bearing clowns are trying to lure children into the woods.

"Several children, teens, and at least one mother living at the town's Fleetwood Manor Apartments claim they've spotted a 'clown or person dressed in clown clothing' in woods near the complex, sometimes doing things as benign as standing alone and waving hello while other times gathered en masse waving knives, chains, candy, money and green lasers. As clowns do."
Collapse