Am I the only one who is delighted with American Horror Story: Roanoke thus far? This is shaping up to be one of my favorite seasons of AHS, and that's saying something.

If you're looking for some classic reading for this season, you can't go wrong with the excellent The Cold Embrace: Weird Stories by Women, published earlier this year by Dover Horror Classics and edited by well-known scholar S.T. Joshi.

Here's the official description: This original anthology presents 19 short stories that cover nearly a century of speculative fiction by women authors. Selections range from Mary Shelley's "Transformation" (1830), a pendant to Frankenstein in its themes and motifs, to "Where Their Fire Is Not Quenched" (1922) by May Sinclair, a tale of time travel that follows its heroine to Hell and back.

Gripping narratives include Virginia Woolf's "A Haunted House," in which a ghostly couple revisit their former home; "A Wedding Chest" by Vernon Lee, a story of romance and revenge that unfolds in Renaissance Italy; and Charlotte Perkins Gilman's "The Yellow Wallpaper," recounting a woman's psychic possession by the previous occupant of her attic bedroom. Additional tales include E. Nesbit's "From the Dead," "The Eyes" by Edith Wharton, Elizabeth Gaskell's "Curious If True," and many others. Editor S.T. Joshi offers an extensive Introduction as well as notes on each of the authors. 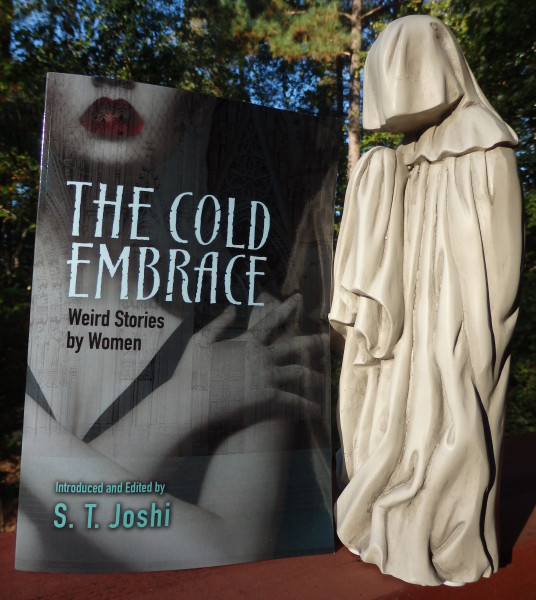 One of the spooky stories included is "Death and the Woman" by Gertrude Atherton (1893).

Here is a chilling little excerpt from "Death and the Woman":

"She knew that it was Death who was coming to her through the silent deserted house; knew that it was the sensitive ear of her intelligence that heard him, not the dull, coarse-grained ear of the body.

"He toiled up the stair painfully, as if he were old and tired with much. work. But how could he afford to loiter, with all the work he had to do? Every minute, every second, he must be in demand to hook his cold, hard finger about a soul struggling to escape from its putrefying tenement. But probably he had his emissaries, his minions: for only those worthy of the honor did he come in person.

"He reached the first landing and crept like a cat down the hall to the next stair, then crawled slowly up as before. Light as the footfalls were, they were squarely planted, unfaltering; slow, they never halted."
Collapse