It's time for a Halloween-friendly book giveaway!

To enter, you need to be 1) over the age of eighteen, 2) not me (or my doppleganger, Mirror Universe self, alternate universe self, evil twin, or future ghost), and 3) living somewhere on the planet Earth (because shipping costs to the International Space Station are outrageous).

The winner gets to choose one of these new paperbacks, and I will ship it immediately.


Option 1: A Lonely and Curious Country: Tales from the Lands of Lovecraft edited by Matthew Carpenter (2015)

Official Description: "Horror can lurk in the most unlikely places: from the secluded cottage to the teeming metropolis. Lovecraft knew that terror could be rooted in the geography of a place as much as in an uncaring cosmos or a man’s soul. In these 17 brand new tales of chilling Lovecraftian horrors by leading authors, discover new lands of terror. Learn the truth about the glories of Y’ha-nthlei and what really happened to Erich Zann. Discover the fate of Tillinghast’s monstrous machine and do a deal with Nyarlathotep down in the byways of Mississippi. Sometimes that lonely farmhouse, brooding silently in its isolation, can be more terrifying than forgotten monoliths on an uncharted Pacific island."

Official Description: "With just one tiny exception, J Gifford is an ordinary, decent, small-town kind of guy. He pays his bills on time. He waters his lawn. He treats his neighbors and the folks with whom he does business with kindness and respect. He's good to children and small animals. The tiny exception? He's a vampire.

"Born in 1920, and "brought over" shortly after D-Day in a little French village, 90-year-old Gifford still looks and feels 24. He has friends, a place in the community, a thriving business, and a big orange tabby cat named Fiddlestring. He knows where all the good restaurants are. He's very tidy about that "tiny exception" and has never killed anybody. All he lacks in his life is the beautiful girl who made him what he is today -- and then mysteriously vanished. Now, suddenly, after sixty-five years, she's back and needs his help. But is she his long-lost love or a serial-killing fiend? Only time—and blood—will tell." 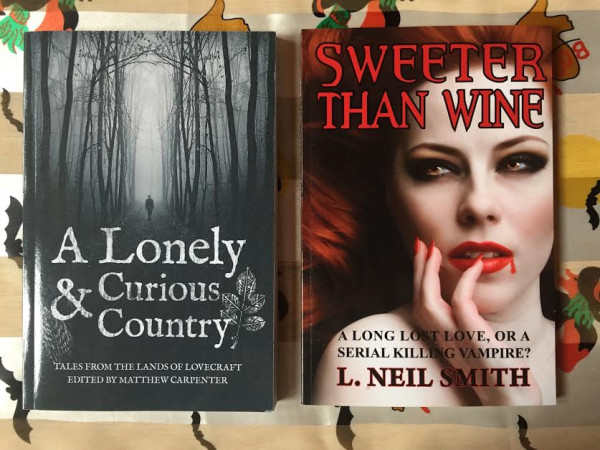 The giveaway is open now and ends on Friday, October 14.

Now, here's a Discussion Question for you: If you could only watch one film on all of the Halloweens to come, which film would you choose? In other words, what's your very favorite "go to" Halloween movie?


“Gorgons, and Hydras, and Chimaeras — dire stories of Celaeno and the Harpies — may reproduce themselves in the brain of superstition — but they were there before. They are transcripts, types — the archetypes are in us, and eternal. How else should the recital of that which we know in a waking sense to be false come to affect us at all? Is it that we naturally conceive terror from such objects, considered in their capacity of being able to inflict upon us bodily injury? O, least of all! These terrors are of older standing. They date beyond body — or without the body, they would have been the same. . . . That the kind of fear here treated is purely spiritual — that it is strong in proportion as it is objectless on earth, that it predominates in the period of our sinless infancy — are difficulties the solution of which might afford some probable insight into our ante-mundane condition, and a peep at least into the shadowland of pre-existence.”
— Charles Lamb: “Witches and Other Night-Fears”
Collapse