Tropical Mary of MoviePilot.com poses an interesting question: "What was the first horror movie ever made?"

The answer hinges on whether or not we count the 17-second silent film The Execution of Mary Stuart from 1895 (directed by Alfred Clark and produced by Thomas Edison) as horror or historical drama. 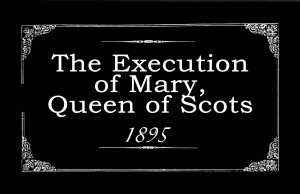 Here is Tropical Mary's argument: "A fundamental aspect of a horror is shock value and its ability to terrify the audience. A modern audience's opinion on what is scary has changed drastically in 120 years, and though it was based on an historical event, the Clark film was not made to be a documentary or a simple re-enactment. At a time when motion pictures themselves were a wondrous new invention (without sound or music), watching a woman being beheaded, regardless of our modern day propensity for of blood and gore, it would have been horrific to an audience in 1895."

What do you think?

If you don't buy the idea that The Execution of Mary Stuart is the first horror movie, then your best bet for the honor would be the three-minute, eighteen-second Le Manoir de Diable (The House of the Devil) by Georges Méliès in 1896.