I'm still broken up about the loss of Anton Yelchin. Art, when it's done well, transcends its time and the artificial boundaries we place between each other, and it helps us reflect on our humanity in the long term. Yelchin was one of those rare artists whose restraint, subtlety, and fierce intelligence made his performances stand apart and speak volumes. (Remember that at the age of twelve he not only held his own opposite but also stole many scenes away from Anthony Hopkins in the adaptation of Stephen King's Hearts in Atlantis in 2001.) He died just weeks before he was scheduled to direct his first film (which he also wrote), and beyond feeling very badly for his family and friends in their loss (which I certainly do), I feel sorry for all of us, because I can't help thinking that the world might have had the pleasure of enjoying another fifty years or more of his talent if tragedy hadn't struck.

But this post is meant to be a celebration, so let's get on with it.

If I had to recommend a starting place for a Yelchin movie marathon, I'd have to go with Rudderless (2014), which may in fact be as close to a perfect film as I've seen in the last decade or more. This marks William H. Macy's directorial debut, and it showcases Yelchin's acting, singing, and skill with several musical instruments. But while it's a dark drama in many ways, I wouldn't exactly call it Halloween viewing. Ditto for the dark-but-not-Halloween-dark Fierce People (2005), which is a "must see" for Yelchin's performance. And regardless of one's opinion of the reboot idea as a concept (I know this is up for debate in certain circles), I don't see how anyone could fail to be won over by his interpretation of Ensign Pavel Chekov in the Star Trek reboot films (2009-2016), but that series is not exactly Halloween viewing, either. Yelchin also shines in several thrillers, perhaps the most intense of which -- yes, even more intense than Green Room (2015) to me -- is Broken Horses (2015). Not quite Halloween-esque, but getting much warmer.

(Note: His voice work in Guillermo del Toro's Trollhunters promises to be list-worthy, so be watching for that this December.) 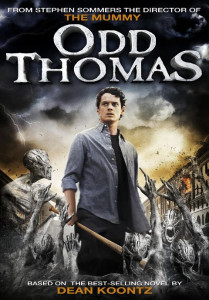 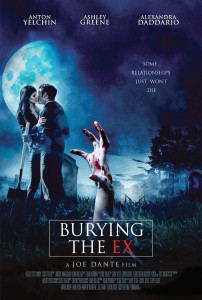 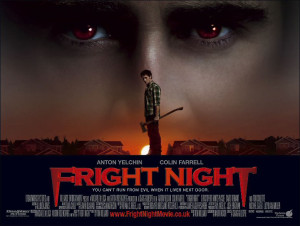 So here is my list of the most Halloween-friendly Anton Yelchin films, ranked in ascending order of recommendation. I hope you watch, enjoy, and celebrate.

#5 Only Lovers Left Alive (2013)
This moody, impressionistic, highly visual film (what else do you expect from Jim Jarmusch?) follows Tom Hiddleston and Tilda Swinton, vampires and lovers who share a long history but now live half a world apart. Really it's a study of entropy, as everything eventually falls apart, and the spookiest character by far is the crumbling ruin-in-progress of Detroit, which serves as the backdrop for much of the film. Shakespeare aficionados may or may not like the film's argument about the Bard's identity. Yelchin portrays practically the only human character in the movie and connects with viewers in a poignant and subtle way the other characters do not, and he shares some crucial scenes with Hiddleston, in particular. I couldn't take parts of it too terribly seriously -- especially because Hiddleston's character is like a vampiric Forrest Gump who apparently knew everyone who was ever interesting anywhere and anytime throughout history -- but certain scenes were dark magic, and I'm glad I watched it.

#4 Burying the Ex (2014)
This is a tongue-in-cheek send-up of the horror genre. Yelchin's character works at a horror shop called Bloody Mary's, and his new love interest works at a Halloween-themed ice cream parlor called I Scream, and if only his deceased ex-girlfriend weren't undead and more than a little territorial, the hero and heroine could share real romance. The movie makes nods to everything from the original The Twilight Zone series to Shaun of the Dead, and if you're going to have a make-out scene in a film, this is how to do it: that is, in a graveyard at an open-air showing of Night of the Living Dead. Yes, that's my aesthetic exactly. It's crass and bawdy and the easily offended will be, but it's also exuberantly self-indulgent in its embrace of genre. If you watch it, be sure to note all the details of each set: the posters on the wall, the items on the shelves, etc. Jolly Halloween goodness.

#3 Fright Night (2011)
This is a horror-heavy reinterpretation of a humor-heavy camp film, and if you take its origins into account, you can have quite a good time with this movie. In many ways it is much smarter and more stylish than the original. Colin Farrell is Jerry Dandridge, the vampire who just moved into the neighborhood; David Tennant is Peter Vincent, the over-the-top Vegas showman and self-styled vampire expert; and Yelchin is Charley Brewster, the teenager who has to step up, step in, and save his town from evil almost single-handedly. Some very good actors (including Toni Collette as Charley's mother) had some very good fun making this movie, and the cat-and-mouse back-and-forth between Farrell and Yelchin, in particular, is simply delicious to watch.

#2 Odd Thomas (2013)
No warnings or caveats here: I recommend this to everyone. I thoroughly enjoyed this charming film about Odd Thomas (an absolutely perfectly cast Yelchin), an unimposing and self-effacing young Everyman who just happens to be psychic. ("I see dead people, but then, by God, I do something about it.") It's based on the Dean Koontz novel of the same name, which I readily admit I haven't read (please don't throw rotten tomatoes... or, you know, anything else), but I understand from those who have that the movie stays quite true to the dry wit and unexpected poignancy of the book. Odd Thomas heroically helps both the living and the lingering dead, and this film has it all: horror, mystery, action, romance, humor, heartbreak, and hope. I don't see how you can go wrong with this kind-hearted gem.

#1 The Driftless Area (2015)
Wow. Just wow. This film is based on the "neo-noir" novel of the same name by Tom Drury (which I have read, thank you very much), and it's dreamlike and haunting and very powerful. Yelchin and Zooey Deschanel lead a remarkable, pitch-perfect cast (including John Hawkes, Alia Shawkat, Aubrey Plaza, Frank Langella, and Ciarán Hinds) in unfolding a narrative that's part coming-of-age tale, part love story, part mystery and revenge saga and murder drama, and part study of life in a small town. The real heart of The Driftless Area is the question of whether we simply drift along and let life happen to us (as it often seems) or if there is meaning and quite possibly destiny involved in our stories and choices, as well. I put it on this list because it's also a ghost story of the most literal (and also the most figurative) kind. True confession: I found both the film and the book to be gutting, personally, but in the best possible way. This is the sort of art I was talking about above, and Yelchin's quietly intense and invested performance is one of its highlights and revelations. This isn't a jump-in-your-seat kind of Halloween spine-tingler; instead it's the kind of film that insists you connect the dots and work on it (during and after the viewing), but if you're looking for haunting, well, this is it.

Here is the trailer.

(Note: The above is also the subject of my latest "Looking Back into Genre History" segment on the StarShipSofa podcast, which is available here.)
Collapse