Let's get some vintage science fiction in this countdown!

Here is the teaser for The Men in the Walls by William Tenn published in the October 1963 issue of Galaxy: 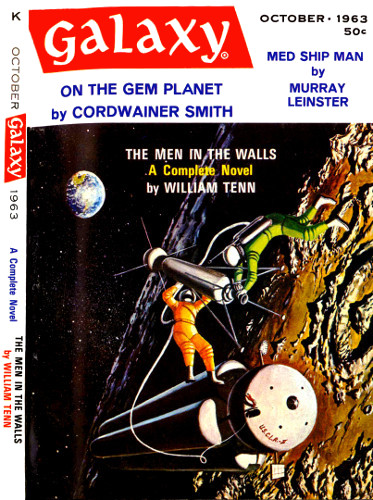 Download the free audio reading of The Men in the Walls from Librivox here.
(The description is as follows: "There are giant, technologically superior aliens who have conquered Earth. People live like vermin in holes in the insulation material of the walls of the homes the monsters have built, sneaking out to steal food and other items from the aliens. A complex social and religious order has evolved, with women preserving knowledge and working as healers, while men serve as warriors and thieves. For the aliens, men and women are just a nuisance, neither civilized nor intelligent, and are generally regarded as vermin to be exterminated. This story begins, 'Mankind consisted of 128 people. The sheer population pressure of so vast a horde had long ago filled over a dozen burrows.'")

Read the online text of the story from Project Gutenberg here.

He was on the other side. He was in Monster territory. He was surrounded by the strange Monster light, the incredible Monster world. The burrows, Mankind, everything familiar, lay behind him.

Panic rose from his stomach and into his throat like vomit.

Don't look up. Eyes down, eyes down or you're likely to freeze right where you are. Stay close to the wall, keep your eyes on the wall and move along it. Turn right and move along the wall. Move fast.

Eric turned. He felt the wall brush his right shoulder. He began to run, keeping his eyes down, touching the wall with his shoulder at regular intervals. He ran as fast as he possibly could, urging his muscles fiercely on. As he ran, he counted the steps to himself.

Twenty paces. Where did the light come from? It was everywhere; it glowed so; it was white, white. Twenty-five paces. Touch the wall with your shoulder. Don't — above everything — don't wander away from the wall. Thirty paces. In light like this you had no need of the glow lamp. It was almost too bright to see in. Thirty-five paces. The floor was not like a burrow floor. It was flat and very hard. So was the wall. Flat and hard and straight. Forty paces. Run and keep your eyes down. Run. Keep touching the wall with your shoulder. Move fast. But keep your eyes down. Don't look up. Forty-five paces.

He almost smashed into the structure he had been told about, but his reflexes and the warnings he had received swung him to the left and along it just in time. It was a different color than the wall, he noted, and a different-textured material. Keep your eyes down. Don't look up. He came to an entrance, like the beginning of a small burrow.

Don't go in that first entrance, Eric; you pass it by. He began to count again as he ran. Twenty-three paces more, and there was another entrance, a much higher, wider one. He darted inside. It'll be darker, at first. The walls will soak up light from your glow lamp.

Eric paused, gasping. He was grateful for the sucking darkness.